Apple is bringing support for viewing multiple apps at once to iPads. Starting with iOS 9, users will be able to open a new app in a small window without exiting an existing app using a “slide-over” view. 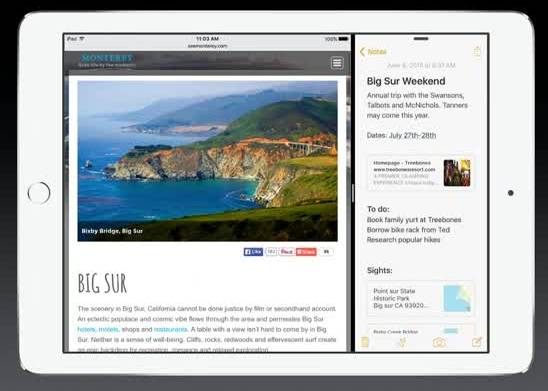 Want to keep both apps on the screen at the same time, allowing you to interact with either one at any time? You can enable Split Screen mode for that.

There’s also support for picture-in-picture video, which lets you open a video in a small window that stays on top of the screen when you’re using other apps. The video window can be moved or resized.

Apple is offering APIs that lets app developers add support for the new multi-tasking features… but not all features will be available on all iPads.

There’s new multi-tasking view that lets you switch between apps, and that’s available on most recent iPhones and iPads. But the rest of the new features are iPad-only… and full-fledged, split-screen apps are only available on the iPad Air 2.

Apple is releasing an iOS 9 developer preview today, with a public beta coming in July and a full release later this year.