Apple is updating the virtual keyboard in iOS 8… but for the first time the company is also now adding support for system-wide, third-party keyboards.

In other words, you can expect to see popular Android apps like Swype and Swiftkey come to the iPhone and iPad. 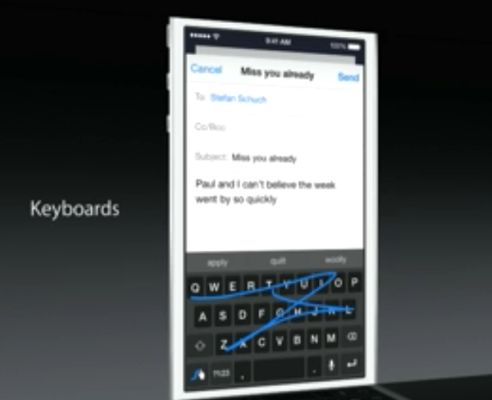 Third-party keyboard support is part of Apple’s new support for apps that are sandboxed from the core operating system… but which allow other apps to access features securely.

This makes it possible to do things like include support for widgets in the notification center, or for keyboard apps that work across the system, no matter which other apps you’re using. Up until now, that was a type of app that Apple did not allow.

Update: SwiftKey is one of the first keyboard app makers to announce plans to release an iOS app. Apple also showed a picture of Swype running on iOS during the WWDC 2014 keynote.