Apple’s iOS 7 will be available for download starting September 18th, and it’ll ship on the new iPhone 5C and iPhone 5S that go on sale this month. It brings a new user interface, improved multi-tasking, and new settings and controls, among other things.

Meanwhile, a hacker has just figured out how to jailbreak the last version of iOS. You can now jailbreak an iPhone 5 running iOS 6.1.4 and install the Cydia store for jailbroken devices. 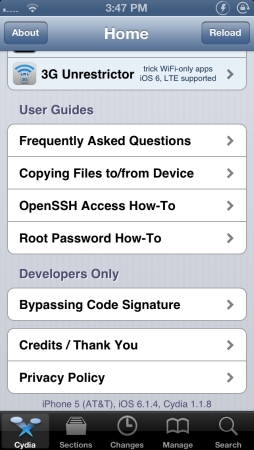 Redmond Pie has details on the iOS 6.1.4 jailbreak. It’s a complicated process at this point, and there’s no easy-to-use tool like redsn0w that’ll do all the heavy lifting for you just yet. While a handful of people have been able to use code shared by hacker Winocm to jailbreak their phones, most folks will probably want to wait until an easier method is available.

The software was released in May, and it was a bug fix and security update — and one of the security vulnerabilities it had patched was the one people had been using to jailbreak the iPhone 5.

Apple’s getting pretty good at patching this sort of vulnerability — so if you’re planning to jailbreak your iPhone 5, you might want to hold off on updating to iOS 7 (or anything later than 6.1.4) for a while.