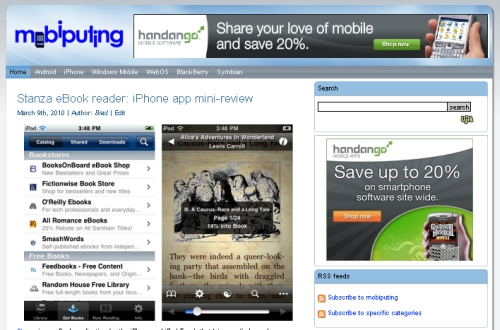 I wanted to take a moment to let you know about a new web site I’ve just launched, called mobiputing. As you can probably guess from the name, mobiputing is and will continue to be a sister site to Liliputing. But while Liliputing is focused on netbooks and mobile computing hardware and software generally, my aim with mobiputing is to cover the world of smartphone apps.

Right now there’s a pretty heavy focus on iPhone and Android applications on the site, because that’s where most of the development has been recently (and because I happen to have a Google Nexus One Android phone and an iPod Touch to test out new apps). But I’m hoping to touch on most of the major platforms, and I’ve already started lining up writers to help out with app reviews and recommendations for other platforms including WebOS.

While the netbook market was just getting started when I launched Liliputing, smartphones have clearly been around for a little while. But it’s an exciting time in the smartphone space, with Android phones like the Nexus One giving the iPhone some serious competition in terms of specs and available applications. And Microsoft is set to launch the most significant revision to its mobile operating system in a decade later this year.

Of course, I’ll also continue covering software development that’s relevant to the mobile computing space at Liliputing. So you can still expect to see the occasional post about Ubuntu, MeeGo, Jolicloud, Android, and Chrome OS. But if you’re at all interested in news about smartphone apps and operating systems, I hope you’ll check out mobiputing.