Now Internet.org has released an app designed to help do that. Install the Internet.org app on your phone and you have free access to a handful of websites including GoogleSearch, Wikipedia, AccuWeather and of course Facebook.

At launch the app is available to Airtel customers in Zambia. Eventually Internet.org could reach partnerships with additional carriers in more countries. 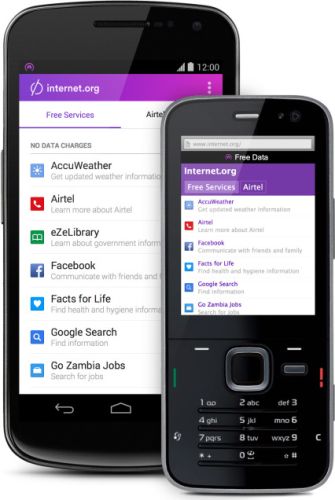 Airtel customers can either install the Internet.org app or access the same features from the Facebook app for Android. If you have a feature phone that doesn’t run Android, but which does have a web browser, you can just navigate to Internet.org to get started.

The app and service is designed to let people access at least some internet content without racking up data charges.

Many folks in developing nations already use cellphones to communicate even though they may not have a computer, internet connection, or even a land line at home. While the Internet.org app doesn’t provide free access to all of the content available on the web, it could be a major step in helping people in developing nations get online.

At the same time, it provides Airtel a way to get subscribers hooked on their service (and could be a foot in the door toward getting them to pay for access to additional sites) and helps Facebook and other members of the Internet.org initiative try to broaden its user base. Right now there are billions of people around the world who have never tried to use Facebook because internet access is out of reach.