Intel doesn’t use the Atom name very much anymore, but the company still ships a lot of Atom-based, low-power processors for use in low-cost Chromebooks and Windows laptops. Basically if you find a sub-$300 laptop with an Intel Celeron or Pentium processor based on Gemini Lake or Apollo Lake architecture, you’re probably getting the successor to Intel’s Atom processors.

But just because a chip is Atom-based doesn’t mean it’s slow. Some recent Gemini Lake chips, for example, can outperform an entry-level Intel Core Y-series processor when it comes to CPU-intensive benchmarks… although they usually lag behind in graphics.

But that could change when Intel’s upcoming “Jasper Lake” chips ship. 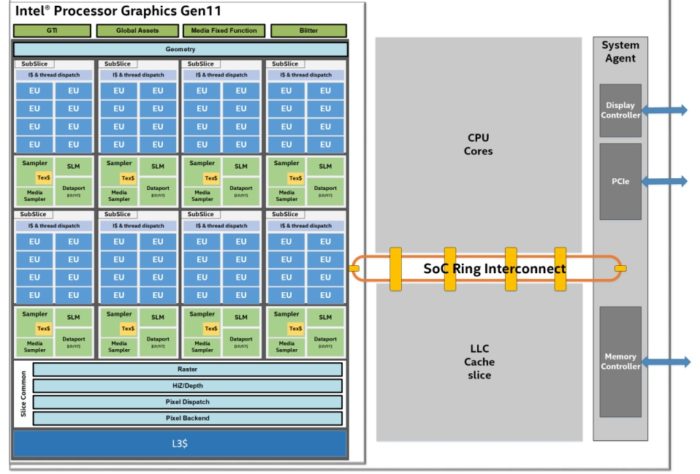 Details are scarce on the eventual follow-up to Intel’s Gemini Lake processors, but Phoronix notes that Linux code commits in recent months suggest that the low-power processors will feature Intel Gen11 graphics, which is the same integrated GPU technology used in Intel’s 10th-gen Core processors.

As I found when I reviewed the Dell XPS 13 2-in-1 with a Core i7-1065G7 processor with Iris Plus graphics, the new GPU may not be as powerful as an entry-level NVIDIA discrete graphics chip… but it blows Intel’s earlier efforts out of the water.

It’s not clear that Jasper Lake chips will have the same exact GPU options as Ice Lake chips. But odds are that we can expect a substantial boost over the integrated graphics found in earlier Atom/Celeron/Pentium processors, hopefully at the price points we’ve come to expect from affordable Chromebooks and entry-level laptops.

Chrome Unboxed reports that it looks like Google has already added support for Jasper Lake chips to the Chromium repository, which means that Chromebooks powered by the upcoming processors are likely on the way… and they’ll likely be relatively affordable, since higher-priced Chromebooks are expected to feature Intel 10th-gen Core “Comet Lake” processors (which, interestingly, feature Gen9.5 graphics).

It’s unclear how far out Jasper Lake chips are though — Intel is also said to be working on “Elkhart Lake” chips that also feature Gen11 graphics and Intel’s new Atom-based “Tremont” architecture….

Update: I’m seeing conflicting reports about whether Elkhart Lake chips will be 10nm or 14nm, so I’m going to just call it unclear at this point.