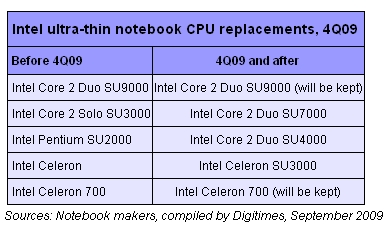 There’s something I’ve been wondering about for a while: Do we need Intel Atom processors anymore? The Atom has become the CPU of choice for virtually every netbook on the market, but the first netbooks to hit the streets had Intel Celeron or VIA C7-M chips. It’s not the Atom processor that makes a mini-laptop a netbook. It’s the small size, light weight, and low price. And if NVIDIA wants to push its ION platform and Intel wants to push its CULV platform, I’m cool with that. As long as I can still pick up a 3 pound laptop for around $400.

With that in mind, I don’t really expect the Atom processor to disappear overnight. But I’m eying the Intel CULV space pretty carefully as Intel continues to pump out relatively low power chips that can perform circles around an Atom CPU. And it looks like things are only going to get better. Intel hasn’t really spelled out too much about the next generation of CULV processors, but DigiTimes gathered some data from notebook makers and found that the future is largely dual core.

Specifically, the Core 2 Duo SU900 will keep on keeping on, but Intel is expected to replace the Core 2 Solo SU3000 series with the Core 2 Duo SU7000 and the Intel Pentium SU2000 will be upgraded to an Intel Core 2 Duo SU4000. These changes should drop during the 4th quarter of 2009, so just in time for the holidays.

There’ll still be a few single core CULV chips around, but it looks like we should be able to expect higher performance from thin and lights in the future. Now what would be really nice is if Intel and/or Microsoft eased their restrictions a bit so that we could start seeing these processors show up in 10 inch and smaller netbooks instead of 11.6 inch and larger laptops.