But that’s just one of the new NUC mini computers Intel is working on.

A series of images posted to ChipHell also make it clear that the company has at least four new models on the way, including NUC systems aimed at gaming, mainstream, and workstation use.

Here’s what we’re expecting from Intel in the next few years:

The upcoming Intel Phantom Canyon NUC is expected to feature an Intel 28 watt Tiger Lake-U processor, support for discrete graphics (with NVIDIA GeForce GTX 1660 Ti or RTX 2060 options), a Thunderbolt 3 port, and support for WiFi 6 and Bluetooth 5, among other things. 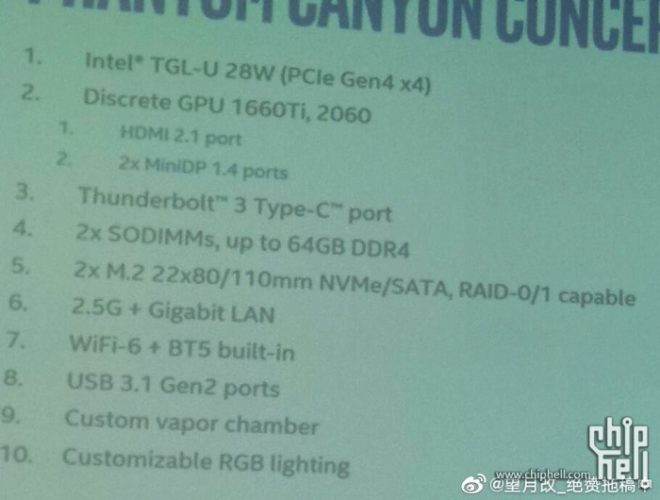 According to FanlessTech, it’s in the very early stages of development, so it’s possible things could change — and we haven’t seen any concept images yet. But the computer is expected to feature a “custom vapor chamber” for cooling and customizable RGB lighting to… look cool, I guess.

This will be a follow-up to Intel’s Hades Canyon and Skull Canyon systems, which are small desktop computers with high-performance CPU and graphics hardware. They’re larger than a typical NUC, but that’s because they need a lot more room to cool their higher-power components. 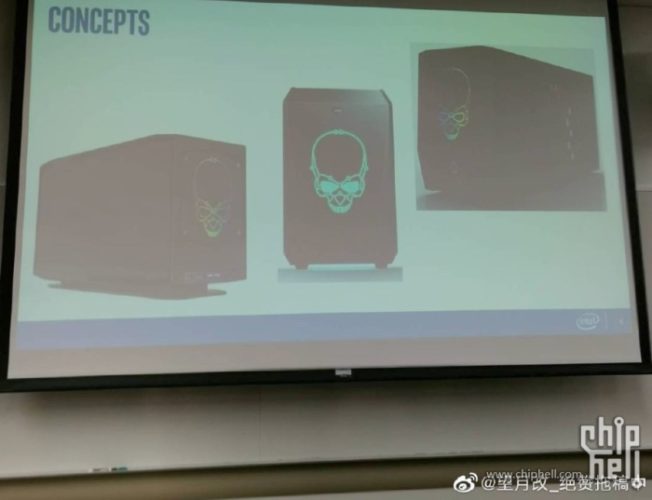 The Ghost Canyon model is expected to feature a 45 watt, 9th-gen Intel Core i9-9980HK octa-core Coffee Lake Refresh processor and it may sport a PCIe x16 slot for a removable discrete graphics card.

Since previous-gen gaming NUC models had integrated graphics (Intel Iris Pro for Skull Canyon, and Kaby Lake-G with AMD Radeon graphics for Hades Canyon), it’s not surprising that Ghost Canyon looks like it will be bigger than its predecessors.

If an old roadmap is accurate, we could see Ghost Canyon ship starting in early 2020.

As previously discussed, this model is expected to be available soon with up to an octa-core Intel Xeon E-2286M or 9th-gen Intel Core i7-9850H vPro processor and it supports discrete graphics cards.

Newly posted images make it clear that those graphics cards should be removable, allowing users to upgrade or replace the computer’s GPU.

This will be next mainstream NUC, and it’s expected to ship this year with 25 watt, 14nm Intel Comet Lake-U processor and Intel UHD graphics.

I haven’t seen any pictures of this model yet, but I expect it’ll look a lot like Intel’s recently-launched Islay Canyon NUC with Intel 8th-gen Whiskey Lake processor options.

via FanlessTech and ChipHell