Intel’s Atom Z3600 and Z3700 chips are low-power processors designed for tablets, notebooks, and other low-power devices. During development, these chips were known by the code-name “Bay Trail,” and now that they’re available in actual devices, Intel calls them Atom chips.

But unlike earlier generations of Intel Atom processors, these new chips feature Intel Ivy Bridge-level graphics, quad-core CPUs, and performance that’s good enough for many basic PC tasks. They’re also low-power chips that tend to have a TDP of around 5W or less.

The first Bay Trail chips launched in the second half of 2013. But recently Intel added a number of new chips to the lineup including lower-power models for cheap tablets and higher-performance chips for somewhat more expensive models. Now the company is providing more details about the new processors. 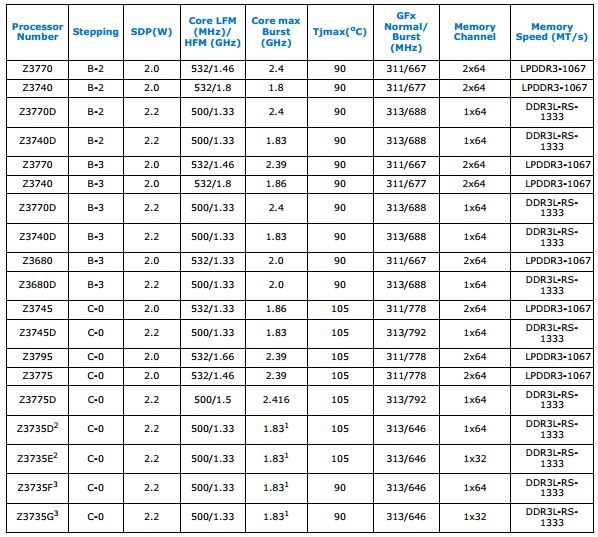 The Intel Atom Processor Z3600 and Z3700 Datasheet has detailed specifications for the new processors, including the Atom Z3735 series aimed at low-cost Android and Windows tablets and the higher-end Atom Z3775 and Z395 chips for higher-performance products.

For the most part the new chips have CPU speeds that are similar to last year’s models. But Intel has added support for faster graphics, tolerance for higher CPU temperatures, and a few other changes including support for 4K video, USB 3.0, and more… on some models.

Some of the cheaper chips including the Z3735F and Z3735G chips don’t benefit from all of the improvements, but these chips are aimed at entry-level tablets.

The spec sheet also includes a few Atom Z3600 series dual-core chips, but Intel seems to have largely left those chips behind: All of the new Bay Trail processors are quad-core chips. 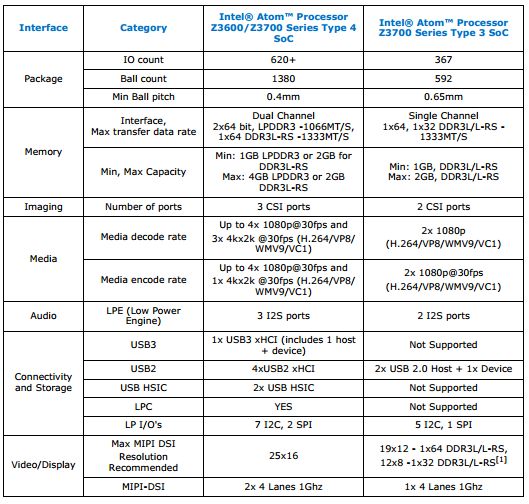 12 replies on “This is Intel’s new line of Bay Trail chips for tablets, notebooks”