You know how Asus just introduced a set of dual-screen laptops with one regular display and a second ultra-wide one above the keyboard? Intel’s showing off one of those too… except the Intel Honeycomb Glacier prototype is more of a concept device for a next-gen gaming laptop

And the second screen arguably isn’t even the most impressive thing about this portable computer. 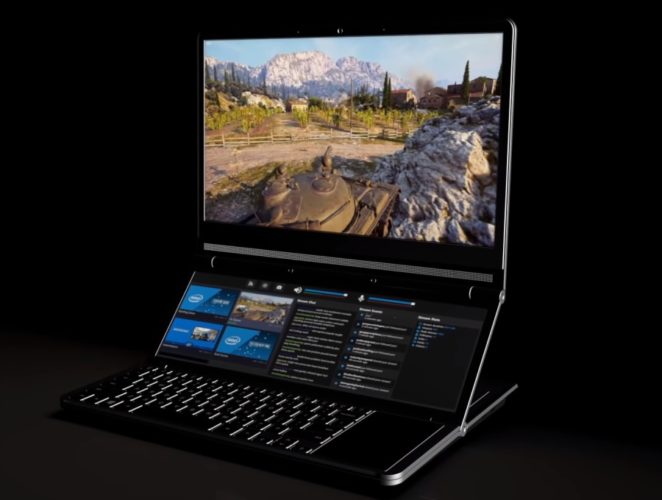 When the lid is closed, Honeycomb Glacier looks like a normal laptop. Lift the lid and it looks like… well, an Asus ZenBook Pro Duo, I guess. But keep lifting the lid and a second hinge allows you to elevate the screens so that the primary display is closer to your eye level and the second screen is easier to see than it would be if it were lying flat.

That means using a laptop on the go could be more like using a desktop — you don’t have to hunch down to see the screen as you’re typing.

Another benefit to putting the screen at eye-level? You can use eye-tracking technology for effectively. So Intel backed in Tobii’s eye-tracking system, allowing you to do things like switch focus from one screen to the other or even from one app to another without using your hands.

Meanwhile, the dual screen setup could work for gamers who want to see the action in the primary display, while viewing maps or other content in the smaller secondary display, or comments from a live stream.

It could also work for productivity or content creation, giving you access to shortcuts, toolbars, or other items for audio, video, or image editing apps in the second screen, for example. Or you could just use it to display multiple apps at once, much the way you would with a dual-screen desktop PC setup.

The Honeycomb Glacier prototype features a 15.6 inch 1080p display and a 12.3 inch, 1920 x 720 pixel widecreen display below it. Intel says the system has a motherboard that can support up to 195 watts of components, and the prototype is currently using a 9th-gen Intel Core H octa-core processor and NVIDIA GeForce GTX 10-series graphics.

Overall, the folks at tech news sites including The Verge, Engadget, and Tom’s Hardware who got a chance to try out HoneyComb Glacier prototypes at Computex seem impressed with the design. But it’s still just a concept device for now. It’ll be up to PC makers to decide whether to build their own hardware based on the idea.