Update: The company also has its own new Cherry Trail models. Pricing has also been announced. The Cherry Trail model with Windows 10 is priced at $159. A Core M3 model costs $399, and the Core M5 version will set you back $499.

Intel’s 2nd-gen Compute Stick should be available in the first quarter of 2016. 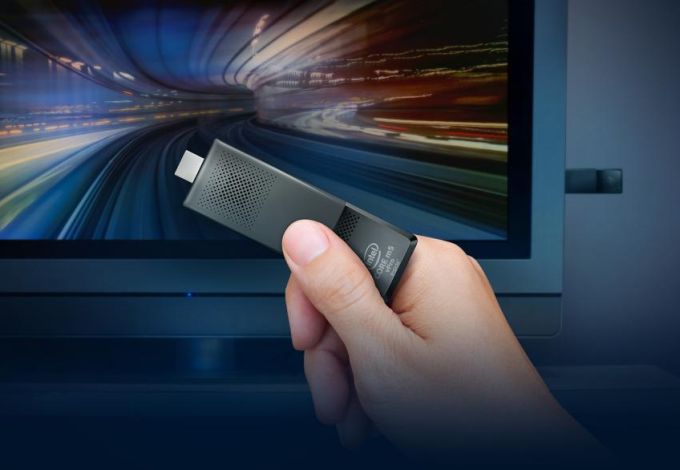 There will be at least three models at launch, including the STKMV64CC with a Core M5-6Y57 vPro processor, STKM3W64CC, and STKM364VCC with Core M-6Y30 chips. While the Core M chips have 4.5 watt TDPs, the product pages for the Compute Sticks show 12 watt TDPs.

Anyway, the new Compute Stick models should offer significantly better performance than the 1st-gen model that I reviewed last year.

Intel will offer the M3 model with Windows 10 or with no operating system at all, and says the new stick should support Linux or Windows.

Each model features 4GB of RAM, an SDXC card reader with support for up to 128GB of removable storage, an HDM 1.4 B connector, and a USB 3.0 port on the device. There are also two extra USB 3.0 ports on the 5V, 4A power adapter.

The new Compute Stick measures 4.5″ x 1.5″x 0.5″ which makes it about half an inch longer and a tiny bit thicker than the original Intel Compute Stick. But the extra horsepower, improved wireless, and other upgrades should more than make up for a tiny bit of extra bulk.