The chip maker is only talking about the new Intel Atom T5500 and T5700 chips this week because they’re at the heart of the new Intel Joule system-on-a-module that the company is releasing for IoT developers.

That means we may eventually see these chips powering smart home products, drones, robots, and other devices… but probably not tablets, phones, or PCs. 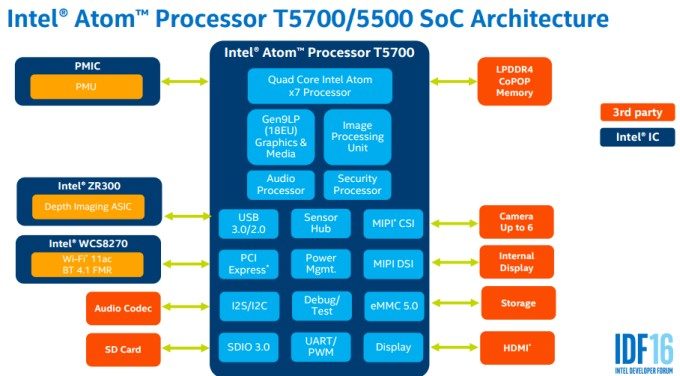 Intel largely gave up on pushing Atom for those systems earlier this year in a major strategy shift. The company’s upcoming Celeron and Pentium chips based on the Apollo Lake platform will fill that niche instead.

They offer up to 10 times the performance you’d expect from an Intel Atom z34xx series “Edison” chip, which is what the company’s previous IoT developer platform was based on. 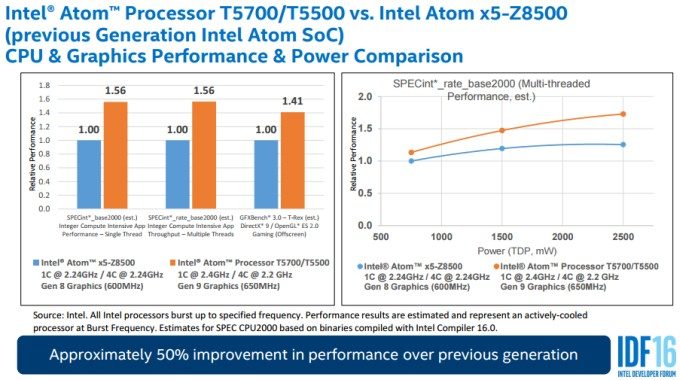 The new Atom T5500 and T5700 chips are based on Intel’s new Goldmont architecture (just like Apollo Lake), and features Intel Gen9 low-power graphcis with support for hardware-accelerated 4K video encoding and decoding in HEVC, H.264, and VP8.

Intel says the new chips offer up to 80 percent higher memory bandwidth and supports camera sensors that can capture up to 60 percent more pixels at higher frame rates. 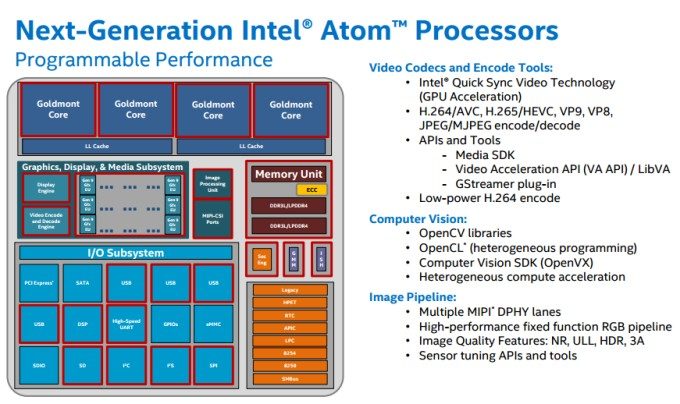 Wondering how Intel managed to squeeze so much more performance out of the new processors? Well, the move from Silvermont to Goldmont architecture surely had something to do with it… but the move away from mobile devices helps too. The new chips can consume more power than their predecessors.

Update: Actually, is possible that some of the power consumption figures listed on The charts below may relate to Intel’s new Atom E series chips, not the T series. It’s not clear how much power the new T series chips will use.

While Atom, Celeron, and Pentium chips based on Silvermont/Cherry Trail/Braswell typically had TDP ratings between 4 watts and 6 watts, the new Goldmont-based chips have 6 to 12 watt TDPs.