Since the introduction of the Raspberry Pi low-power mini computer in 2011 we’ve seen a number of tiny computers and developer boards hit the market. Many pack more power than the Raspberry Pi, and most also have higher price tags. But they tend to rely on ARM-based processors in order to keep prices (and power consumption) low.

The Minnowboard takes another approach. It’s a $199 dev board powered by an Intel Atom E640 processor. It’s aimed at developers, hackers, and other folks looking to put together a DIY system with an x86 processor as well as professional developers looking for a device that helps build prototypes for embedded systems. 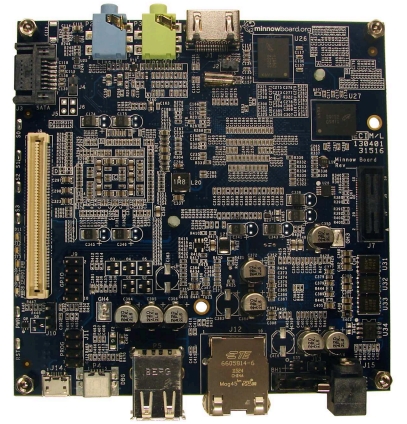 The Minnowboard measures about 4″ x 4″ and features 1GB of RAM and just 4MB of flash storage for the firmware. It uses a microSD card slot or a SATA II drive for primary storage.

There’s a version of Ångström Linux for the device, but the Minnowboard is also compatible with the Yocto Project, which lets you roll your own custom Linux distribution.

Since the board has an x86 processor, it should be compatible with a wide range of operating systems, although the Atom E640 chip is a low-power processor designed for embedded systems, so you’re probably not going to get a great experience if you try to run heavy-duty software like Windows 8.

The project comes out of Intel’s Open Source Technology Center, and the company is calling it an open hardware device — meaning that as much of the software as possible is open source, and the schematics and other hardware details are available. There are some closed source binaries in the UEFI boot firmware and 3D graphics driver among other things.

Folks who want to rely on open software as much as possible can use the device without hardware-accelerated graphics using open source video drivers. But there are no available open source drivers for GMA 600 graphics which support 3D acceleration at this point.

You can order the MinnowBoard for $199 from a handful of distributors in the US.

Update: In case it wasn’t already clear, the MinnowBoard can be used as a PC, but it’s basically a tool for developers, hobbyists, and professionals. Even the folks behind the product say that folks looking for a general-purpose computer might be better off buying something like an Intel NUC system.

Update 2: The folks behind the $199 Gizmo Explorer dev board with an AMD G-series chip, which launched earlier this year, are making a pretty strong case that their device may be a better option for many folks looking for a low-cost development board for x86 applications. Check out their comparison chart to see how the Gizmo Explorer compares to the Minnowboard in terms of input and output options and graphics capabilities.

via CNX Software and The Register