Intel and its partner Opening Ceremony unveiled a a high-end, internet-connected bracelet called the MICA in September. Now that the it’s ready to go on sale in December at Barnes New York and Opening Ceremony for $495, the company’s are starting to show off exactly how this “luxury smart accessory” works.

It turns out the smart bracelet isn’t actually all that smart. But it is probably a lot more fashionable than a typical smartwatch. 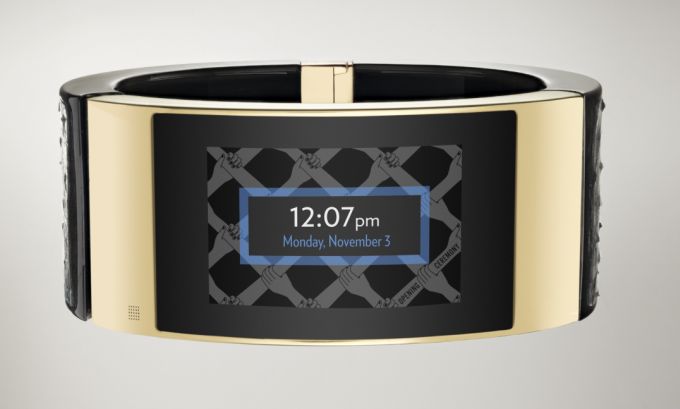 The part of the bracelet that faces the world features 18K gold trim, snakesin, gems, and other premium materials. The bottom has a curved sapphire glass touchscreen display that you can view discretely.

The MICA has a SIM card so it can connect to the internet without pairing with a phone. This lets you view text messages, appointments, and other alerts. But there’s no keyboard or voice controls — so responding to messages is a bit tricky. You get up to 50 pre-selected responses, so you can choose from a list of replies to let people know you’re running late or what have you.

You can customize that list of canned responses using a website, but Intel and Opening Ceremony are clearly going for ease-of-use rather than power here.

It also supports notifications from Facebook, Gmail and Google Calendar and has a “personal concierge” service from TomTom and Intel that offers reminders and other information based on the time and location such as “time to go” when an appointment is coming up. There’s also integration with Yelp to display local restaurant ratings and reviews.

The system gets up to 2 days of battery life, charges via a micro-USB cable, and probably has one killer feature (other than the design): customers get 2 years of AT&T data service at no extra charge. Intel is footing the bill (and passing it on to customers by including it in the price of the bracelet).

The MICA is an unusual entry in the wearable market. It’s expensive, sold exclusively through luxury retailers, and doesn’t run third-party apps or pair with a phone. But it’s also probably a lot easier to use, and it’s aimed at people who might be willing to spend hundreds of dollars on a bracelet anyway, and might be willing to invest a little extra to receive notifications on the same device.

via Intel, Gizmodo, and Engadget