The Intel “Horse Creek” developer board is compact computer board featuring 8GB of DDR5 memory, a PCIe 5.0 slot and SD card reader for storage, and support for Linux-based software.

But while this is an Intel product, the heart of the system is a SiFive Performance P550 quad-core processor based on RISC-V architecture rather than an x86 chip from Intel. The companies announced they were working together on the Horse Creek platform last year, and Intel recently showed off a Horse Creek prototype during its Intel Innovation 2022 event. 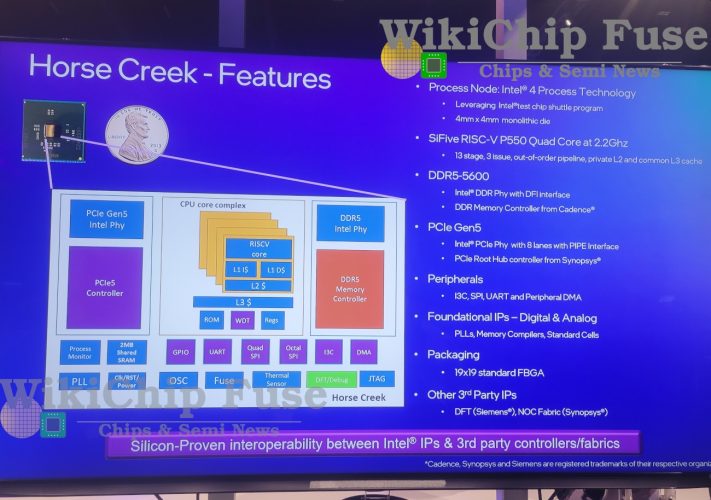 According to a report from WikiChip, the Horse Creek board features a SiFive P550 64-bit processor with four cores clocked at 2.2 GHz, a 13 stage, 3-issue out-of-order pipelines, support for DDR5-5600 memory and 8 lanes of PCIe 5.0.

It’s manufactured using an Intel 4 process, because while Intel is probably best known for designing and building its own chips, the company is also positioning itself as a foundry that can build chips for clients like SiFive… which is part of what makes the Horse Creek platform interesting.

The chip doesn’t have a built-in GPU, but Intel has demonstrated the Horse Creek developer board playing games and videos, as well as other applications, suggesting that the CPU is powerful enough on its own for basic computing tasks.

There’s no word on when Horse Creek developer boards will be available for purchase or how much they might cost.

You can find more details at WikiChip.