Looking for a little desktop computer to stick next to your TV or use around the house, but want something a little more powerful than an ARM-based TV stick like the MK802 or GK802? Intel’s NUC (Next Unit of Computing) is a computer that measures about 4 and a half inches square, and which packs an Intel Core i3 processor and Intel HD 4000 graphics.

It’s available now from Newegg for $300 and up. 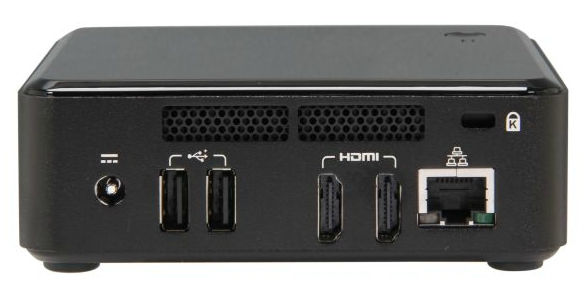 The little computer is powered by an Intel Core i3-3217U processor. It has 2 HDMI ports, 3 USB 2.0 ports and an Ethernet jack. You can connect up to two displays at once, and there’s also support for 7.1 channel audio.

What you don’t get with this little computer is any memory, storage, or operating system. There’s a mini-PCI Express card slot with mSATA support and a second half-sized mini PCIe card slot, so you can add a solid state disk. There are also two memory slots and the system supports up to 16GB of DDR memory.

Several companies have also announced plans to sell pre-built computers based on Intel’s NUC design. Velocity Micro will offer a version with 4GB of RAM, 64GB of storage for $499 and up ($599 with Windows pre-loaded). And Gigabyte has a similar mini-computer which will be available with up to an Intel Core i7 processor as well as support for USB 3.0. No price has been announced for that model yet.