Intel’s new 11th-gen desktop processors (code-named Rocket Lake-S) include a new “Cyprus Cove” architecture which the company says brings up to a 19-percent improvement in instructions-per-cycle for the highest frequency CPU cores. But the bigger change may be the inclusion of Intel Xe-LP integrated graphics, which could bring up to a 50-percent boost in GPU performance for systems that don’t have a discrete graphics card. 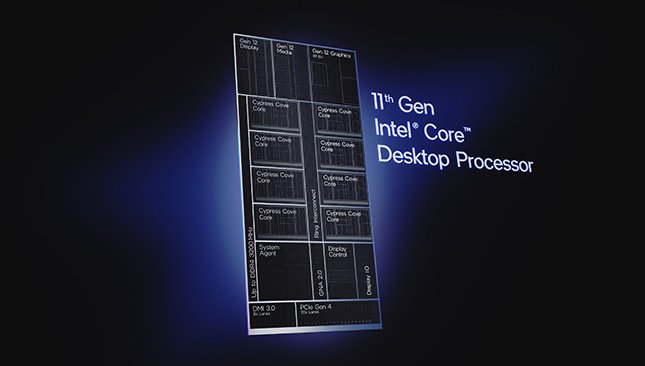 As first detailed in October, Intel says all of the new processors feature Intel UHD graphics with Intel Xe GPu technology, which means there’s support for HDMI 2.0 output allowing you to connect up to two 5K 60 Hz displays or up to three 4K 60 Hz displays without the need for a discrete GPU.

Interestingly, even high-performance chips like the Core i7-11700K seem to only feature 32 a GPU with execution units, compared with up to 96 for 11th-gen Intel “Tiger Lake” chips for laptops. So it’s likely that gamers and graphic design or video professionals may still want to opt for a discrete graphics card.

Other key Rocket Lake-S features include:

Also interesting? There are no Core i3 or lower chips in the 11th-gen desktop processor family yet. Instead Intel is refreshing its 10th-gen Comet Lake lineup with the introduction of some new 2-core/4-thread Pentium Gold and 4-core/8-thread Core i3 chips. These processors lack some of the newer features including Intel Xe graphics, but they’re a lot cheaper.