One of the obstacles to building affordable thin and light computers is the fact that most laptop batteries are big and bulky. While there are compact batteries for tablets and some ultraportable notebooks such as the MacBook Air and the current crop of ultrabooks, these batteries don’t come in standard sizes.

Intel wants to change that by adopting standards for thinner batteries. That could drive down costs by increasing the supply of batteries suitable for use in ultrabooks. 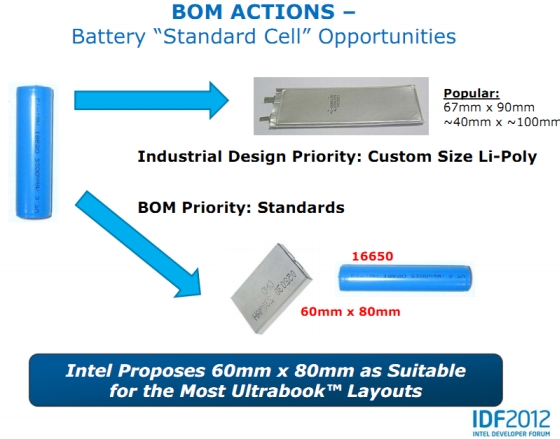 Instead of building custom parts for a laptop, PC makers would be able to just grab some off-the-shelf models. Intel says they wouldn’t just be cheaper, but also potentially better.

Since PC makers would be able to chose from a variety of batteries built by a range of battery makers, there’d be more reason for battery manufacturers to make their products competitive in price and performance.

Intel is proposing 60mm x 80mm as a standard size for ultrabook batteries. That’s about 2.4″ x 3.1″. The company also suggests using cells that have a diameter of 16mm. That’s a little thinner than the 18mm cells typically used in notebooks.

There are also 14mm battery cells available, but Intel dismisses them since they don’t provide as much power and tend to be more expensive.

It’s too early to tell whether equipment makers will adopt Intel’s suggested standards. But if they do, it could drive down the cost of ultrabooks by a little bit.

It could also make it a tiny bit easier for consumers to replace their own batteries — but you’ll probably end up voiding your warranty if you choose to replace an ultrabook battery with an off-the-shelf battery anyway, since you tend to have to disassemble ultrabooks entirely to get at the batteries. They’re not generally designed to be user replaceable.