While 6 of the new chips are aimed at desktops, the rest are 17W and 35W chips aimed at notebooks and ultrabooks. It’s likely that the 17W processors will be some of the first we see in Ivy Bridge-powered ultrabooks.

The new chips include:

They’re all dual core chips with support for hyperthreading and turbo boost technology. They support 1600 MHz DDR memory and have graphics clock speeds of 350 MHz. 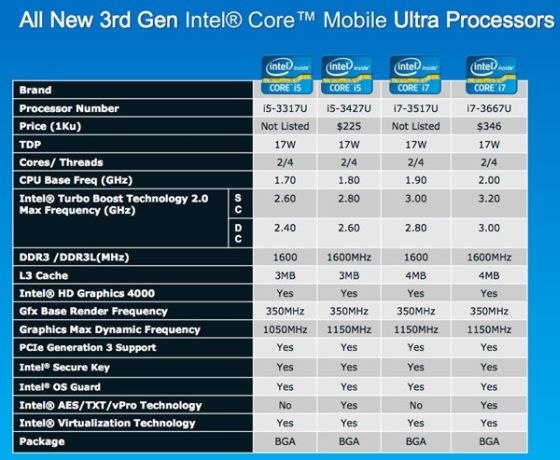 The folks at Laptop Magazine have already benchmarked a few of the first laptops with dual-core Ivy Bridge procesors including the Asus Zenbook UX31A, Lenovo ThinkPad 230, and a sample machine from Intel.

So far the verdict seems to be that the new chips offer better performance than second-generation Core processors (Sandy Bridge) while consuming less power — and offering better battery life.  As expected, they’re not as powerful as the quad-core Ivy Bridge chips though, so don’t expect to play bleeding edge video games on your next ultrabook.

Intel expects to see 110 new ultrabooks this year, many of which will be powered by the new processors. 10 will feature convertible tablet-style designs, allowing you to use the computers as notebooks or tablets. Another 30 will be traditional notebooks… but will have touchscreens built-in to take advantage of the new touch-friendly Metro user interface in Windows 8.

With the Computex trade show set to open in Taiwan next week, it’s likely we’ll see a number of those models soon. 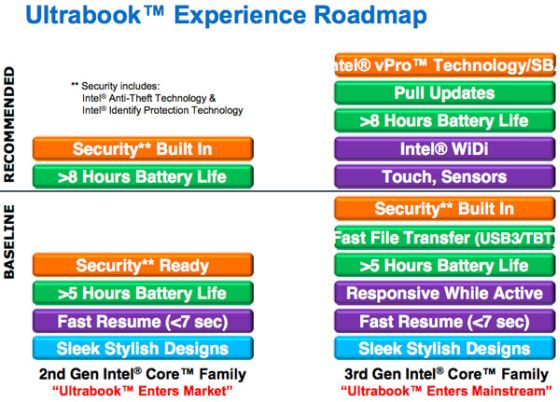 Intel is also reportedly updating its requirements for ultrabooks. In order to call a thin and light notebook an ultrabook, PC makers will still need to keep the size under 18mm for smaller models and 21mm for computers with 14 inch or larger displays. But they’ll also now need to include either a USB 3.0 port or a Thunderbolt port for high speed data transfers.

Of course, the key thing setting all ultrabooks apart from other ultraportable laptops is the processor. Intel trademarked the term “ultrabook,” so if your computer has an AMD processor, it’s not an ultrabook — no matter how much it might look like one.