When Intel first unveiled its Optane line of products based on 3D Xpoint technology, the company promised to blur the lines between traditional SSDs and RAM by offering non-volatile memory like an SSD, but read and write speeds that came close to what you’d expect from memory.

So far Intel has primarily focused on the storage side, selling a line of Intel Optane SSDs aimed at PCs and servers.

Today the company is unveiling the first Intel Optane product that comes in a DIMM form factor, which means you can use Intel Optane DC persistent memory to offer non-volatile storage using the same memory bus that would normally be used for DDR4 DRAM.

In effect, it works like RAM that cab store data indefinitely, even after a reboot. That can dramatically improve startup times and performance for some tasks, particularly on servers, which might normally load huge amounts of data from permanent storage into memory. Now it’s already there. 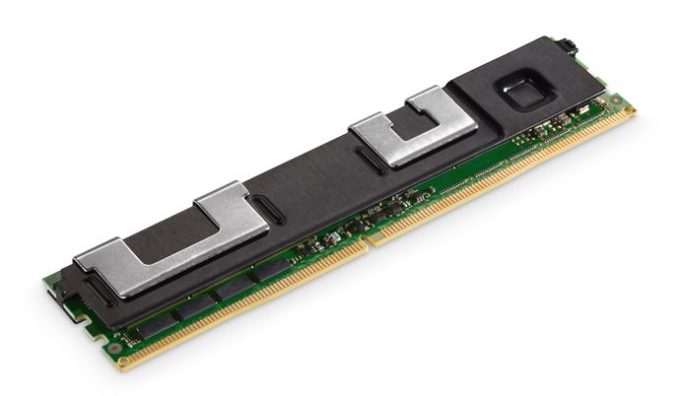 At launch, Intel is targeting data center applications. The company says the goal is to offer users the ability to use massive amounts of memory.

Intel will sell modules in 128GB, 256GB, and 512GB capacities, and the company says you’ll be able to use multiple sticks with a single server to offer more than 3 TB of memory per CPU socket.

They’re designed to slide into a standard DDR4 DIMM socket, and Intel says they’re designed to work with systems powered by the company’s upcoming Xeon Gold and Xeon Platinum chips based on “Cascade Lake” architecture.

Unlike traditional RAM, Intel Optane DC Persistent Memory can retain data even if there’s no power. So you can reboot or power down a server without losing everything that’s currently in memory.

That could allow you to load applications or even operating systems into active memory, removing the latency that normally occurs when a computer needs to send signals back and forth between active memory and storage.

Intel says that could lead to “greater system uptime and faster recover after power cycles,” as well as faster virtual machine storage and performance improvements for cloud computing, encryption, and other applications.

Intel Optane DC persistent memory is expected to ship to “select customers” later in 2018, with wider availability coming next year.

There’s no word on if or when we’ll see Optane persistent memory for consumer-oriented products like laptop or desktop computers.

Update: Legit Reviews has some more details from an Intel briefing. For example, Intel demonstrated a large database system restarting in 16.9 seconds on a system with Optane DC persistent memory. That same database took 2,100.3 seconds (35 minutes) to restart on a system with DRAM memory. In other words, the task was completed more than 124 times more quickly using Optane DC persistent memory.

It’s worth noting that this was a controlled demo, where Intel was able to pick a test that would make its product look good… and where the company didn’t share a lot of details about silly things like the size of the database. But that’s still a pretty massive difference.

via AnandTech and Ars Technica