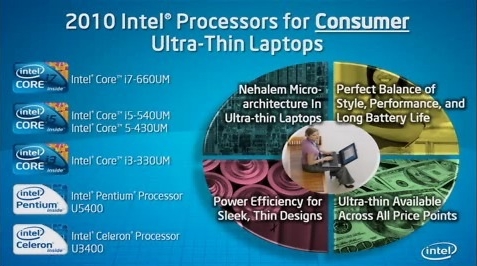 Intel has just unveiled its plans for the ultra-thin laptop space. The company will have a series of new Celeron, Pentium, and Core i-series chips designed to balance power consumption and performance.

At the bottom of the line, there will be a 1GHz Celeron U3400 chip and 1.2GHz Pentium U5400 processor. These will have a total power draw of 17 watts, which includes the graphics processor, which is built onto the same chip as the CPU.

According to Laptop Magazine, the new chips will feature a 32-nanometer design, a 15 percent power reduction compared with earlier CULV chips. Intel also says they should also offer a performance boost of more than 30 percent.