When Intel introduced its Ivy Bridge (3rd generation Core) chips in 2012, the lowest power chip sin the family featured a TDP of about 17 watts. The company has promised that 4th-gen “Haswell” chips would use even less power, with TDPs of 10W.

But today the company confirmed what we’ve been hearing for a while — that you won’t have to wait for Haswell to hit the streets later this year to get a low power Core chip. Intel has already started shipping a new version of its Ivy Bridge processors designed to use as little as 7W on average.

Update: Intel’s new chips actually have TDPs of 10W to 13W, but use less than that during average use. 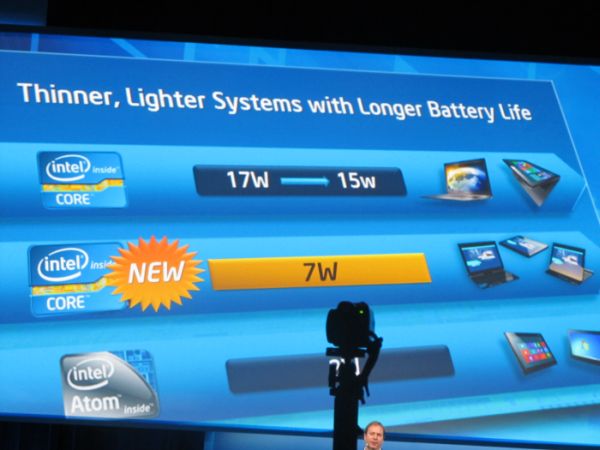 Companies including Acer and Lenovo have already committed to using the new chips, and in fact the Lenovo IdeaPad Yoga 11s which I got a chance to play with this week is powered by one of the new low power 3rd generation Core chips — although the 11s won’t be available until June.

Intel says devices with these new chips will also be able to be up to 20 percent lighter and 20 percent thinner than existing Ivy Bridge systems, while still supporting 1080p displays.

In other words, the new low power Ivy Bridge chips will power tablets that look a lot like systems with Clover Trail or ARM-based systems, but which offer significantly better performance.

Of course, the new low power Ivy Bridge chips are kind of a stopgap technology which will quickly start to look dated once the new Haswell chips are available later this year.