Intel is fleshing out its plans for a line of low-power, dual-core processors for smartphones. Last year the company introduces its first 32nm single core chips, code-named Medfield. This year Intel will be adding dual-core Clover Trail+ chips to the lineup.

We first heard about Clover Trail+ at CES in January, but at the time all Intel had to say was that there would be a chip offering twice the performance of a Medfield processor. But Now Intel says there will actually be at least three members of the Clover Trail+ family, with clock speeds ranging from 1.2 GHz to 2.0GHz. 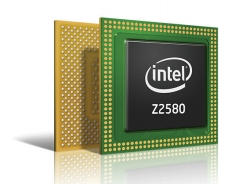 All three chips will feature PowerVR SGX 544 graphics which should give them a bit of an advantage over Medfield chips, although it remains to be seen how they’ll compete with the latest ARM-based chips from Qualcomm, NVIDIA, and Samsung.

The chips are optimized for Google Android phones and tablets, support HDMI output, cameras with image sensors up to 16MP and HDR photography.