Just as Intel’s first smartphone chips are starting to gain traction, the company is preparing to launch its next x86 processor designed for smartphones and tablets. 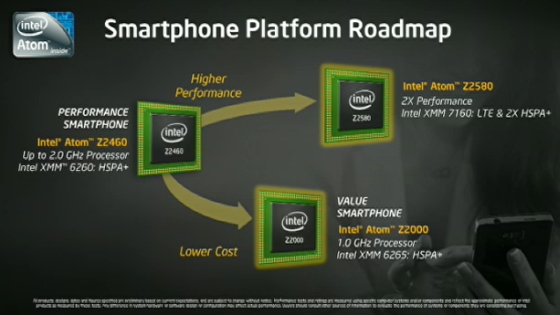 The Intel Atom Z2580 is a dual-core processor that Intel says offers twice the performance of the Atom Z2460 single core chip found in the Orange Santa Clara and similar devices.

The new dual core chip is expected to ship in the first half of 2013, but Intel will begin offering samples to partners later this year.

Meanwhile, the company has announced that the Z2460 Medfield processor family will now be able to run at speeds up to 2 GHz. Like the Z2580 dual core chip, Intel’s single core smartphone processor normally runs at 1.3 GHz. But it can run in burst mode at speeds as high as 2 GHz. Up until recently, Intel had stated that the top speed would be 1.6 GHz.

Intel is also introducing a low power 1 GHz Z2000 single core chip designed for inexpensive smartphones that will run $150 or less. All of the current chips are 32nm processors, but next year we’ll see smartphone chips built with a 22nm process, and the first 14nm chips will launch in 2014.