Ultrabooks are thinner and lighter than traditional laptops and far more powerful than netbooks. But they’re also more expensive than either. Most models cost $800 or more.

That’s because ultrabooks typically have the latest Intel processors and premium components such as solid state disks. Most of the models on store shelves right now also have sturdy metal cases which look great, but which don’t come cheap.

As the second wave of ultrabooks is set to hit the market this summer, some of last year’s models have gone on sale from time to time with prices as low as $600. But right now that’s the exception, not the rule.

Intel says that could change soon. 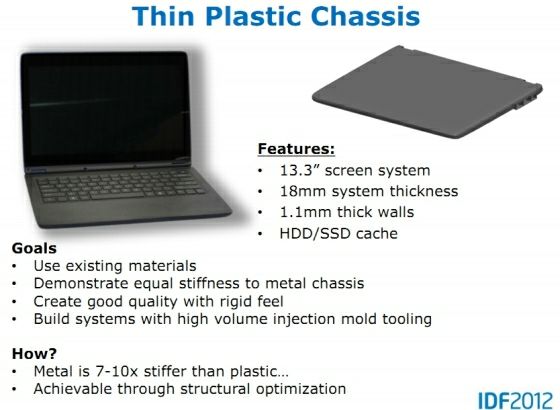 According to Focus Taiwan, Intel expects ultrabooks with price tags as low as $599 to launch in the second half of 2012.

One of the ways Intel thinks PC makers can lower costs is to use plastic instead of metal for the case design. Intel is pushing a special type of plastic which has been structurally optimized to be almost as sturdy as metal… if not quite as attractive.

The cheaper ultrabooks will also likely use hybrid storage with a large hard drive and small solid state disk for cache — much like the system already used by the Acer Aspire S3 and several other ultrabook models.

Ultrabooks with solid state disks, metal cases, and other premium features will likely continue to carry higher price tags. But if Intel is right, the price gap between ultrabooks and other laptops could get a little slimmer before the end of the year.

2 replies on “Intel: Ultrabooks with plastic cases could hit $599 this year”