Intel’s 6th-gen Core processors are set to launch later this year, and while the new “Skylake” processors will be 14nm chips just like the current 5th-gen “Broadwell” processors, Intel is introducing a new microarchitecture which should offer reduced power consumption, better performance, and a big boost in graphics performance.

In fact, Skylake chips could offer up to 50 percent better gaming graphics than Broadwell chips. 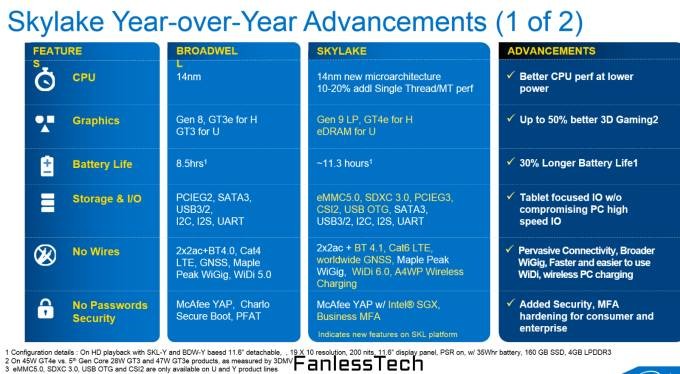 According to a series of leaked slides published by Fanless Tech, here’s a bit of what we can expect:

Not every chip in the Skylake lineup is created equal. THer will be S-series desktop chips, H-series processors for powerful laptops, U-series chips for lower-power models, and Y-Series “Core M” processors for low-power, possibly fanless notebooks, tablets, and other devices.

The Intel Core M Skylake chips should be quite a bit more powerful than their Core M Broadwell predecessors. Intel is promising up to 17 percent more CPU power, up to 41 percent faster graphics, and up to 1.4 hours of additional battery life (when playing full HD video on a system with a 35 Whr battery).

You can find more details at Fanless Tech.

18 replies on “Intel Skylake chips: Up to 50-percent better graphics”