This week the first chips based on Intel’s 4th generation Core “Haswell” technology are hitting the streets. But later this year the company plans to update its Atom processors for phones, tablets, and other low-power devices.

We’ve heard a lot about the upcoming “Bay Trail” tablet and notebook chips based on the new 22nm Silvermont architecture. But Intel’s new “Merrifield” chips for smartphones are based on the same Silvermont technology.

This week the company started showing off a reference design for smartphones featuring Merrifield low-power processors. 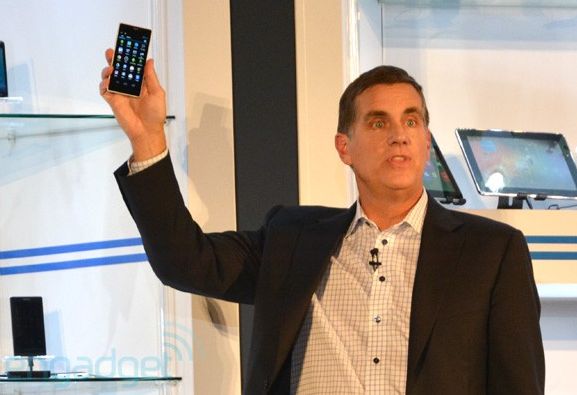 Intel says Merrifield chips will offer better performance and longer battery life than the Clover Trail+ and Medfield chips that are currently available for smartphones.

PC World reports we could see up to a 50 percent performance boost over current-generation chips.

While Intel Vice President Tom Kilroy briefly showed off a reference design for a smartphone at Computex today, the company hasn’t released detailed specs for the device yet, other than saying it offers 3x the graphics performance of current chips and support for screen resolutions up to 2560 x 1440 pixels.

Of course, Intel isn’t only competing with itself here. Most smartphones are still powered by low-power ARM-based processors from companies such as Qualcomm, Samsung, and MediaTek. Intel is kind of a late-comer to the smartphone space, and the company’s x86 processors use an entirely different architecture.

But Intel has made big strides in reducing power consumption over the past few years, allowing its chips to be used in phones that offer decent battery life, long standby time, and the ability to run modern smartphone operating systems including Google Android.

Meanwhile Google has been tweaking Android over the past few years to make sure it can run on x86 processors as well as ARM-based chips. While there are still some Android apps that won’t run on Intel processors, the vast majority of software designed for the mobile operating system can now run on ARM or x86 chips.

Eventually you might not really be able to tell the difference between a phone with an Intel chip and one with an ARM-based chip. But the upcoming Merrifield chips aren’t expected to ship until early 2014, so odds are that if you have a smartphone today, it has an ARM-based processor.