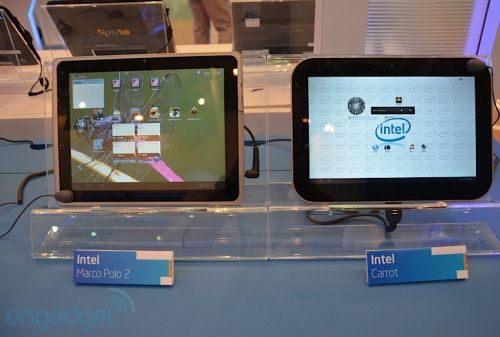 Intel execs promised the company would show off ten tablets with Intel Atom processors running Google Android at Computex, and it looks like the chip maker has followed through on that promise. Engadget spotted about a dozen Android tablets at the Intel booth at the Taiwanese trade show this week.

The good news is that as promised, the tablets all seem to be able to run Google Android 2.3 or Android 3.0.1. The bad news? They don’t necessarily run it well… at least not yet.

Engadget put together a hands-on video and while some of the tablets seem to feature decent 3D graphics performance and touchscren responsiveness, others seem painfully sluggish when performing simple tasks such as swiping left or right to switch virtual home screens.

Bear in mind, these are early prototypes that are getting handled by a lot of people on the trade show floor. The fact that some tablets are working better than others suggests that it’s perfectly possible for Android to run on Intel hardware, but it looks like Intel and/or the company’s hardware partners may have to do some work to optimize performance.

3 replies on “Intel shows off Android tablets with Intel inside”