Intel is starting to show what its upcoming Compute Card modules can do. The company has been stuffing PCs into smaller and smaller packages over the past few years, and that’s culminated in a device that’s not much larger than a credit card.

First unveiled at CES earlier this year, Intel announced this week that the first Compute Stick devices are due to start shipping in August. And the company is providing the first real-world demonstrations of the platform for journalists at Computex in Taiwan. 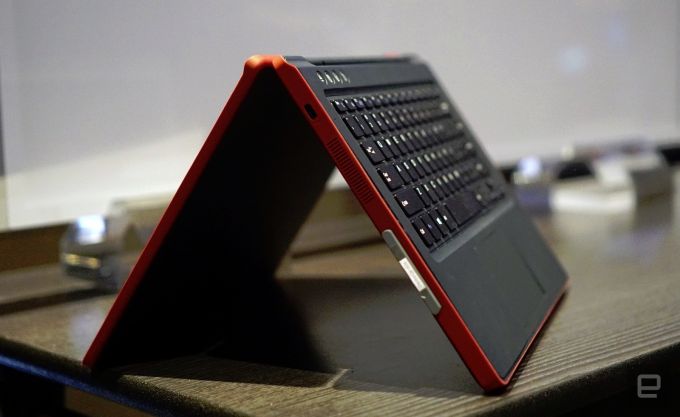 The Intel Compute Card isn’t designed to work as a standalone computer the same way that the company’s NUC or Compute Stick devices are. Instead, it’s a module that you can be used to turn a docking station into a PC, a dumb TV into a smart one, or a media player into an upgradeable device, among other things.

It could also work as a computer module that you can carry with you throughout the day: slide it into a desktop dock at work or school, then take it home and put it in a laptop dock to access all your files, applications, and settings.

Here are a few of the concepts/early designs Intel is showing off:

Since each system relies on a removable card, it should be possible to upgrade hardware after you buy it. Or you could change operating systems or user environments by swapping out cards, allowing multiple people to use the same laptop, desktop, or display docking station with their own personal Compute Cards.

You’ll most likely end up buying a Compute Card from the same company that makes a laptop/desktop/display dock for it rather than buying one from Intel. And it’s not entirely clear at this point if a module bought for a Dell device, for example, will work with an LG dock. While each Compute Card will have a standard interface, I wouldn’t be surprised to see some device makers try to lock down their system with DRM and/or a slot that only accepts cards with a specific shape.

The Celeron and Pentium models are based on Apollo Lake architecture and feature 64GB of eMMC storage. The Core/Kaby Lake-Y versions have 128GB of SSD storage.

MobileGeeks has a brief video showing some of the Compute Card-powered devices including a laptop, a convertible model, a tablet for use in medical environments, and a small desktop computer-style dock.

Update: Roland Quandt has also posted a pretty great hands-on video that, among other things, shows what’s inside the case of a Compute Card:

via Tom’s Guide, Engadget, The Inquirer, MobileGeeks, and PC Watch