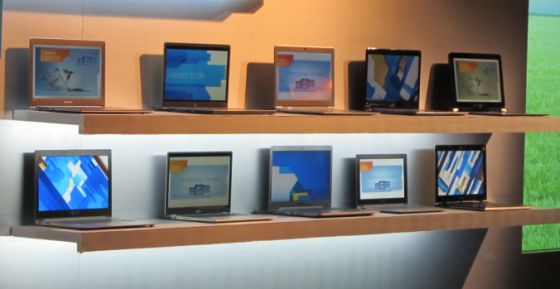 Intel is showing off new concepts for upcoming thin and light laptops, or ultrabook computers. New feature Intel envisions include laptops with touchscreen displays, g-sensors and accelerometers, and gesture-based input that lets you interact with a computer without even touching it.

One of the coolest new concepts is something Intel calls Nikiski. It’s a thin and light laptop with a transparent touchpad that stretches across the palm rest below the keyboard area. You can use the touch area to move a mouse cursor and interact with Windows 8 on a Niksiki notebook — but as soon as you place your palms on the touch area to start typing, your palms are ignored.

Now here’s the cool part. When you close the laptop, a section of the display shows a series of Windows 8 widgets so you can see incoming messages and other data through the transparent touchpad.

You can interact with the computer even when it’s closed — and if you, for instance, click a link on the touch surface, when you open the laptop it will go straight to that app.

There’s no word on if or when ultrabooks based on this concept will hit the streets, but some of Intel’s other concepts seem a little closer to launch.

Intel is convinced that people want touch capabilities on ultrabooks. That’s not just for convertible notebooks that can work in slate mode, but for clamshell notebooks as well.

I’m not entirely sold on that concept. It’s sort of an awkward motion to move your hand up from a keyboard to the display when you want to navigate through a website, resize an image, or perform another action. But in Intel’s press conference at CES, the company showed a few people using ultrabooks from a standing position, where they were reaching down whether they were aiming for the screen or keyboard. In that environment, touch does make sense.

But at least upcoming ultrabooks will feature sliding mechanisms, allowing you to hide the keyboard and use the notebook like a slate. In that situation, touch input seems like a natural step.

Intel is also working on ultrabook designs with motion sensors which will allow you to play games by moving a computer in your hands — much as you can do with Android and iOS phones and tablets. For instance you can steer a car in a racing game by tilting your laptop from side to side.

The company also showcased new gesture-based controls which will allow you to interact with a computer without even touching it. Imagine Xbox 360 Kinect-style gaming on a laptop.

One more thing Intel showed is a new NFC (Near Field Communication) system developed in partnership with MasterCard which will let you make secure credit card purchases using an ultrabook — simply by tapping your credit card to your computer. That action can fill out your billing information on a website so you can complete a transaction without typing a word or digit manually.

The system is tied to your individual computer so that a thief who gets your credit card can’t use it… unless they also steal your laptop, I guess.

Most of these new concepts won’t arrive on the market until much later this year at the earliest, but Intel says there are more than 75 ultrabook designs in the works in addition to the handful of models that are already on the market.