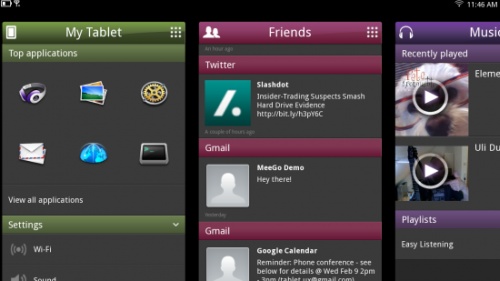 Intel and partners have been showing off a tablet user interface for MeeGo Linux for the past half year or so, and some partners such as Linpus have been building software around it. But this week and Mobile World Congress Intel is trying to make the case that MeeGo is ready for consumer tablets — just days after Nokia announced that its downgrading its plans for MeeGo smartphones to a research project.

The core MeeGo operating system is based on open source Linux code which shares many features whether you’re using MeeGo on a netbook, smartphone, tablet, or in-car entertainment system. But the tablet user interface is designed to take make use of large touchscreen displays.

The home screen users a series of “panels” which can display information from various applications while providing live updates. For instance you could show live updates from your Twitter or Facebook feeds. Overall the panel concept feels a lot like what you’d find on the Notion Ink Adam tablet which runs a highly customized version of Google Android.

CarryPad, Netbook News, and Engadget got some hands-on time with an ExoPC 11.6 inch tablet with an Intel Atom processor running an early build of MeeGo for tablets.

According to Engadget, the software is still in alpha testing, but Netbook News says we could actually see hardware shipping with the MeeGo tablet user interface this summer.

For now, MeeGo for tablets is still clearly a work in progress. There’s currently no support for multitouch gestures, for instance, and while the Intel AppUp Center provides an app store for third party netbook apps, the AppUp Center doesn’t appear to be available for tablets yet.

It’s likely that the source code could be released soon though, which may allow users to download and test the OS on existing tablets with Intel Atom or other x86-based processors.

You can check out some demo videos from Mobile World Congress after the break.

One reply on “Intel showcases MeeGo for tablets”