Want to develop software for a Windows PC? All you need is a Windows desktop or laptop and some software tools. But Windows doesn’t just run on notebooks and desktops anymore — a growing number of Windows devices are tablets, phones, and other devices which feature embedded hardware.

So Microsoft is working with Intel and other partners to create developer boards that let programmers test Windows apps the same way they would Android or embedded Linux apps.

One of the first Windows compatible dev boards will be the Intel Sharks Cove. It’s due out in the second half of 2014. 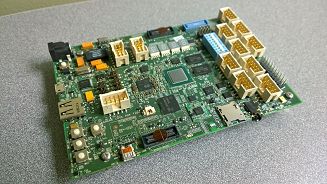 Sharks Cove is basically a single-board computer with an Intel Atom processor, USB and SDIO connectors as well as GPIO pins, UART, I2C, and I2S connections for testing and debugging hardware and software.

Microsoft says creating drivers for tablets and other devices featuring system-on-a-chip (SOC) designs can be different from programming for traditional PCs because SOC products use low-power internal buses and lack  standard connectors like PCI slots and USB connectors.

Microsoft will also developer tools including software that lets Windows boot from a USB drive when used with a Sharks Cove board or similar device. While Intel’s board will be one of the first Windows developer boards available, Microsoft says it’s also looking at the possibility of supporting boards from other vendors.

There’s no word on how much a Sharks Cove board will cost, but according to Microsoft part of the goal is to offer an “affordable” board that developers can without paying additional licensing fees or other costs. There are already a number of ARM-based dev boards for use with Android, Linux, and other operating systems… and Sharks Cove won’t exactly be the first Intel Atom-based model. The MinnowBoard MAX, for example, is expected to launch in June for $99.

3 replies on “Intel Sharks Cove is a Windows-compatible dev board, Microsoft says more to come”