The lines between desktop and notebook computers are getting thinner and thinner. Intel has announced plans to bring its enterprise-class Xeon processors to notebooks, and offer unlocked, overclockable K series processors for notebooks later this year.

Want even more power in your notebook? How about an external graphics card?

Intel says notebooks that feature Thunderbolt 3 ports will be able to connect to external graphics docks. This lets you use a high-power graphics card with your notebook while powering up to two 4K displays (in addition to your laptop display). 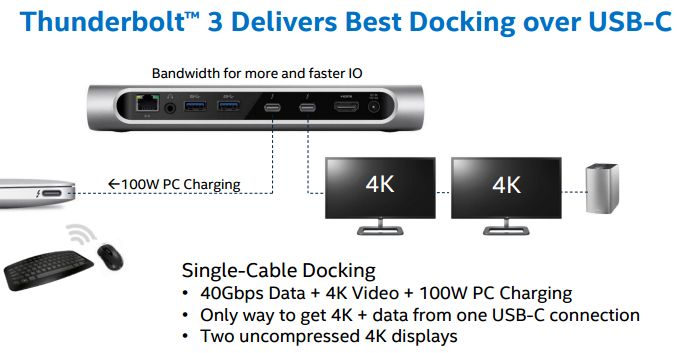 Thunderbolt 3 uses a USB Type-C reversible connector. That one tiny Thunderbolt 3 port can be used to connect a docking station that lets you output video to multiple displays, connect an external hard drive, keyboard, mouse, headphones and Ethernet cable. And since Thunderbolt 3 can handle up to 100 watts of power, you can also charge your laptop through its Thunderbolt port at the same time.

This could let you buy high-performance graphics cards designed for desktop computers and use them with your notebook. And it could also let you upgrade in the future when you’re no longer happy with that card’s performance.

While there are already some notebooks on the market with discrete graphics chips from NVIDIA or AMD, they tend to be less powerful than their desktop counterparts, and they’re not designed to be upgraded… ever.