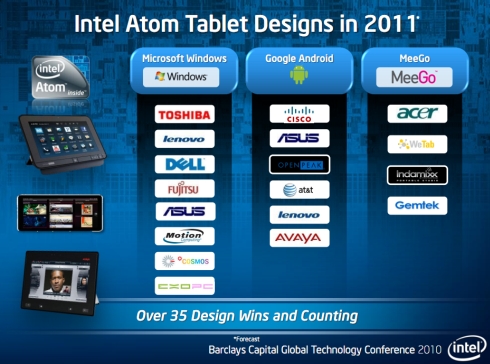 If you look at the most successful internet tablets on the market today, you’ll find that they’re powered by ARM-based chips. The Apple iPad has an Apple A4 chip, while the Samsung Galaxy Tab uses a Samsung Hummingbird processor. That’s probably not a huge surprise, since these tablets are a lot like smartphones, running iOS and Google Android instead of Windows or OS X — and the smartphone space has long been dominated by ARM-based chips. But Intel is the 800 pound gorilla in the PC space, and the company doesn’t want to get cut out of the tablet market.

Speaking at an event yesterday evening, Intel CEO Paul Otellini said that Intel expects at least 35 tablets to come to market in 2011 with Intel chips. Most will likely use Intel’s new Oak Trail platform, which is the next generation of low power Atom chips. Unlike the ARM-based chips found in Apple and Samsung’s current tablets, Oak Trail chips are based on an x86 architecture and will be able to run Windows, Google Android, MeeGo, and other operating systems.

Intel is also making a play for the smartphone space with its upcoming Medfield platform — but it looks like we won’t see those chips ship until later in 2011 and early 2012.