How big a deal is that? According to Intel, the integrated graphics technology in these chips offers anywhere from 1.4x to 2.1x performance boost compared to a computer with an 8th-gen Intel Core i7-8565U Whiskey Lake-U processor and Gen9 graphics. 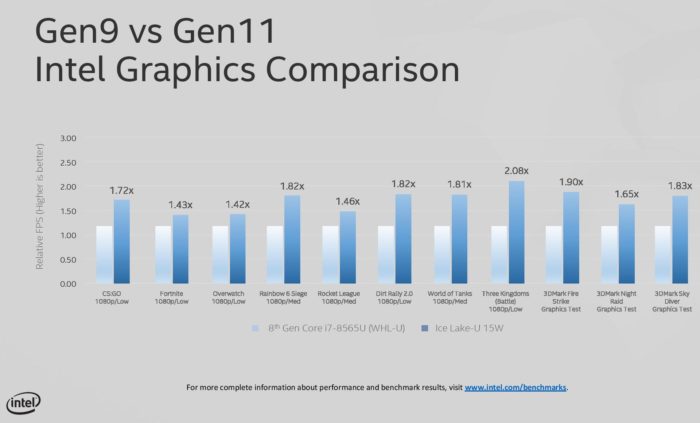 That should allow you to play more modern PC games at 1080p resolutions on Intel-powered laptops that lack discrete graphics. AnandTech reports that these are Intel’s first processors to offer 1 teraFLOP graphics performance.

The site also notes that an Ice Lake-U chip with Gen11 graphics appears to be pretty competitive with an AMD Ryzen 7 3700U processor featuring AMD Radeon Vega 10 graphics… when both chips are running at 25 watts. The difference is that many laptop makers use Intel’s default setting of 15 watts, while many AMD-powered machines are set to 25 watts. So AMD may still have an edge when it comes to real-world performance.

You can find more details at AnandTech and PC World — but note that the results so far all come from tests run by Intel. So again, real-world results may look a little different once independent testers have a chance to run tests on Intel’s new chips.

Meanwhile, Intel is also re-confirming that the new graphics architecture is just part of the story of Ice Lake. Some other new features include:

Those AI-related tweaks should offer “up to 8.8 times higher peak AI inference throughput.”

Intel will likely have more to say about its upcoming Ice Lake processors when the company delivers its Computex Keynote on May 28th.