As previously announced, Intel plans to launch a series of 11th-gen Core chips, code-named “Rocket Lake-S,” in early 2021. Now the company is providing some details about what we can expect from those chips. 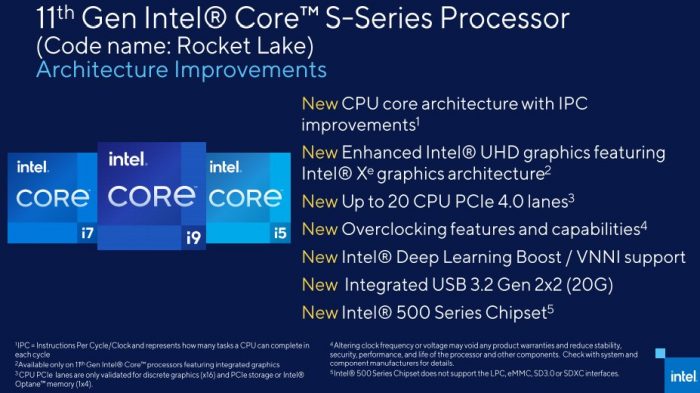 Despite the fact that Intel has moved to 10nm for its laptop processors, Rocket Lake-S chips will be manufactured using a 14nm process. But Intel says Rocket Lake’s “Cypress Cove” architecture combines features found in its recent 10nm chips, including Intel Xe graphics (which debuted in 11th-gen Tiger Lake processors) and technology from 10th-gen Ice Lake’s Willow Cove CPU cores that have been backported to 14nm.

You can also expect much higher power consumption from these desktop chips – while Ice Lake and Tiger Lake processors tend to top out at 25 to 28 watts, Rocket Lake-S chips will likely have a TDP of up to 125 watts.

According to Intel, the new chips will offer up to 50-percent better graphics performance than an equivalent 10th-gen Comet Lake-S processor, and “double digit” performance gains in instructions per clock (IPC). 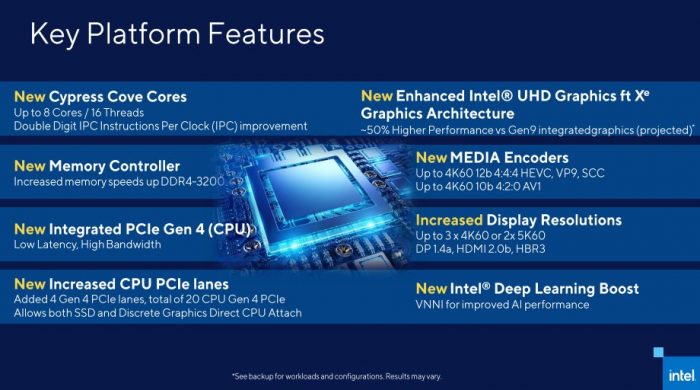 The company hasn’t provided details about specific Rocket Lake-S chips yet, and we’ll probably have to wait at least a few months to get them.

But the company did give us a clue about power consumption by explaining that its performance comparisons are what you’d get if you pitted a computer with a 125W Rocket Lake-S 8-core processor against a machine with a 125W Intel Core i9-10900K 10-core Comet Lake processor.