This year Intel brought support for up to 8 CPU cores, 16 threads, and TDPs in the 35 to 65 watt range to its 11th-gen Core chips for laptops. But before introducing those “Tiger Lake-H” processors in May, the company unveiled the slightly less impressive Tiger Lake-H35 series in January. Featuring 4 cores, 8 threads, and up to a 35 watt TDP, these chips are basically higher-performance versions of existing Tiger Lake-U processors.

And now there are a few more of them. Initially the Tiger Lake-H35 family had just three entries, but Intel has quietly added two more to the list. 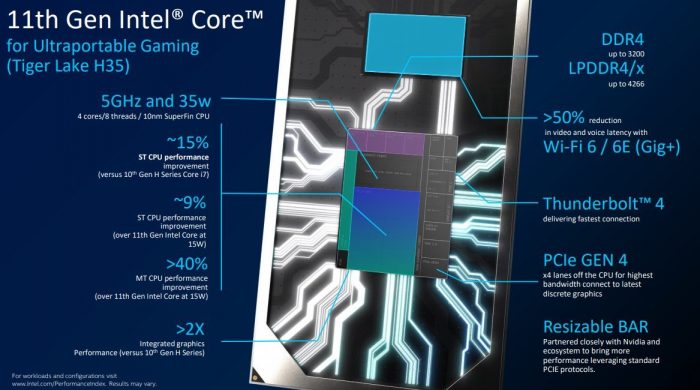 Otherwise, the main differences seem to be related to the base and max turbo speeds for the new chips. You can see a comparison in the table below:

There’s no word on if or when we’ll start to see laptops or low-power desktop computers powered by the new processors. But now PC makers have two more Tiger Lake-H35 chips to choose from.

Or they could opt for the higher-performance Tiger Lake-H series chips, listed below: