When Intel launched its Comet Lake H family of 45-watt chips for laptops and compact desktop computers in April, there were six processors in the lineup.

Now there are nine.

A little while back, Intel added the Core i9-10885H, and this week Intel quietly added two new Comet Lake-H processors to its website, and according to a recent Reddit post from the makers of the XMG line of gaming laptops, the reason may be due to supply issues with some of Intel’s other chips. 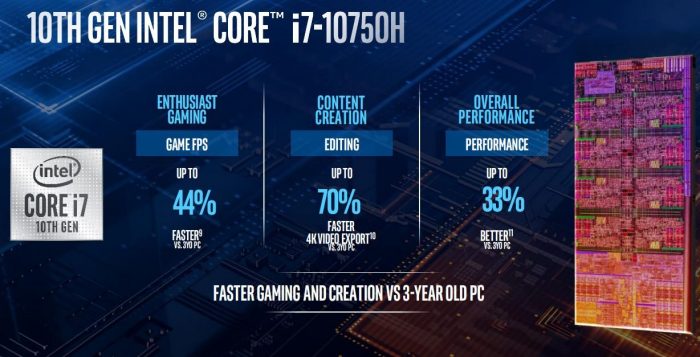 Apparently Intel is having trouble cranking out enough Core i7-10875H processors, so the company has decided to produce a slightly less powerful Core i7-10870H to help meet demand. It’s base and turbo clock speeds are 100 MHz lower, but otherwise it’s pretty much the same 8-core, 16-thread chip with 1.2 GHz Intel UHD graphics, 16MB of cache, and support for up to 128GB of DDR4-2933 memory.

The other new chip is the previously unannounced Intel Core i5-10200H, which seems to be the new entry-level option. It’s a 4-core, 8-thread processor with a 2.4 GHz base frequency and support for turbo speeds up to 4.1 GHz, which is 400 MHz lower than the top turbo speed of the Core i5-10300H.