At this week’s Intel Developer Forum in San Francisco, Intel suggested that the “sweet spot” for tablets with detachable keyboards is around 8 to 9.5mm (0.31″ – 0.37″) because at that point device makers can offer a good balance of compact design and decent performance.

But Intel also offered advice for designing systems as thin as 7mm (0.27 inches). 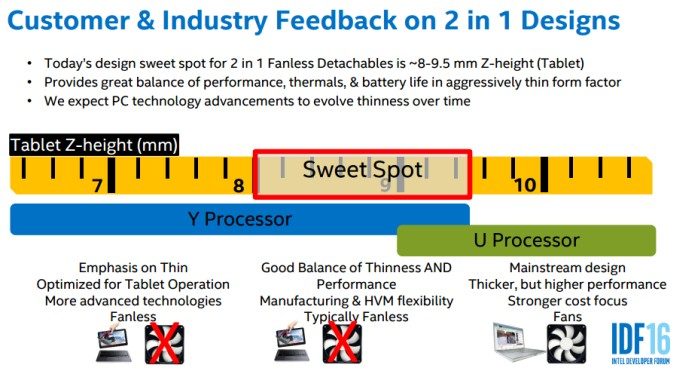 Here are some of the ways Intel says you can reduce the thickness of tablets:

The company also suggests considering reducing the size of the circuit board (to make more room for batteries) and using OLED displays, which are thinner than LCDs, although they’re also more expensive.

One suggestion I suspect will annoy Liliputing readers: consider soldering components to the mothboard instead of using removable cards. For instance, Intel says a soldered M.2 solid state drive takes up 84 percent less surface area and is 43 percent thinner than a typical M.2 SSD.

Likewise, a soldered WiFi adapter can use about 29 percent less space.

In other words, one of the easiest ways to make 2-in-1 tablets thinner? Make it harder for users to open them up and replace or upgrade the components.