Intel’s 4th generation Core processors are designed to use less electricity while providing better performance than their predecessors. In fact, Computer World reports Intel is now saying that laptops with the upcoming “Haswell” chips could offer up to 50 percent more battery life than models with 3rd-gen “Ivy Bridge” processors. 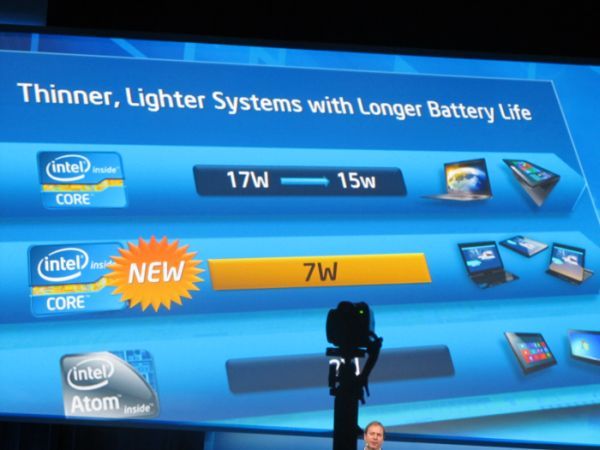 That’s a bold claim, since the processor is only one of the power-hungry components in a laptops. The display, memory, storage, and other components all use electricity as well.

But by improving the efficiency of its chips, both while working at full load and while idle or in standby, Intel says laptops with Haswell processors will be able to run for much longer without recharging the battery.

Of course, the improvements won’t necessarily apply to every laptop with a Haswell chip. While the lowest-power Haswell processors will have have TDPs of 10 watts (or what Intel calls a 7W SDP, or “scenario power design”), most will actually use more energy than that.

But the point is that if you took an ultrabook today that gets around 6 hours of battery life and swapped out the Ivy Bridge CPU for a Haswell part, you should be able to squeeze a few hours of extra battery life — especially when you’re performing light-duty tasks where the computer has time to idle. Ultrabooks with the new chips could use as little as 100mW of power while idle.

We’ll also likely see some of these Haswell chips in upcoming tablets and notebook/tablet hybrids.

Device makers are expected to introduce a number of Haswell-based products at the Computex trade show in June.