One is the next-gen NUC Extreme compact computer, code-named Beast Canyon. Powered by up to an Intel Core i9 Tiger Lake-H processor, the new Intel NUC 11 Extreme will support full-length discrete graphics cards, making it a bit larger than previous NUC systems, but potentially much more powerful.

The other thing Intel teased is its upcoming Alder Lake chips for desktops and laptops, which will be 10nm chips that combine high-performance and energy-efficient CPU cores onto a single chip to balance performance and power consumption. 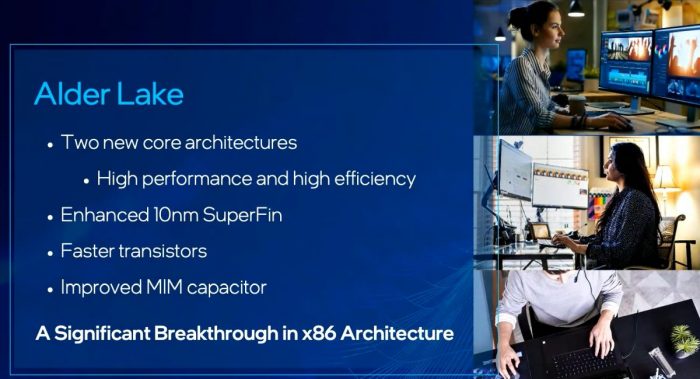 If the idea sounds familiar, that’s because chip makers that produced ARM-based processors have been using ARM’s big.LITTLE technology to pair different types of CPU cores on a single die for years. But up until recently that hasn’t really been a thing in the x86 chip space.

Intel’s first attempt at combining high-performance and energy-efficient CPU cores on a single chip was the company’s underwhelming Lakefield processor family, which barely perform better than Intel’s Atom-based Celeron and Pentium processors, but which also carry a much higher price tag. Unsurprisingly few devices featuring those chips have shipped to date.

Details leaked earlier this year suggest we could see laptop chips with as many as 14 CPU cores.

Intel says more details about its Alder Lake chips will be available later this year, but for now the company is confirming that after getting the first Alder Lake desktop chips ready for testing earlier this year, Intel has now done the same for Alder Lake mobile chips. They’re now sampling to customers. 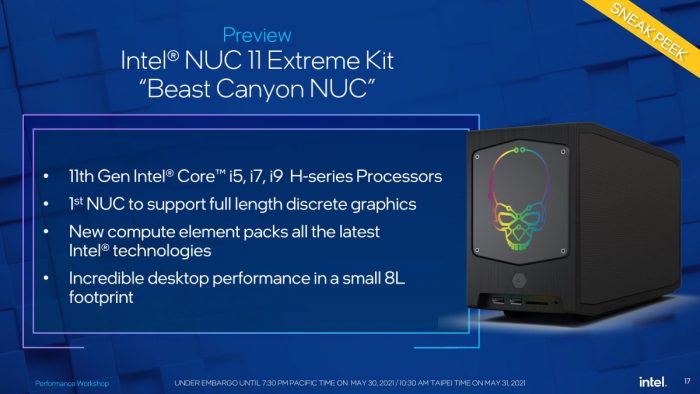 As for the upcoming Intel “Beast Canyon” NUC 11 Extreme computer kit, it’s basically a small desktop computer with a bit of modularity: in addition to support for full-length or half-length graphics cards, it has a slot for an Intel Compute Element, which is basically a full-fledged computer (complete with CPU, memory, and storage) on a PCIe card that connects to the Beast Canyon chassis.

Beast Canyon is a follow-up to the NUC 9 Extreme “Ghost Canyon” NUC which featured a smaller chassis and support for Compute Elements with 9th-gen Intel Core chips.