Intel’s been offering a line of tiny desktop computers as part of its NUC (Next Unit of Computing) initiative for a few years. And Intel’s not the only company shrinking the desktop PC.

Gigabyte, ECS, Dell, Lenovo, Zotac, and others offer compact desktop computers with Intel or AMD processors and support for Windows, Linux, and other operating systems. And that’s not even counting the growing number of Chromeboxes.

But Intel thinks there’s room for the market to grow… by shrinking. The company’s looking ahead toward next-generation mini PCs which make today’s NUC systems seem big. 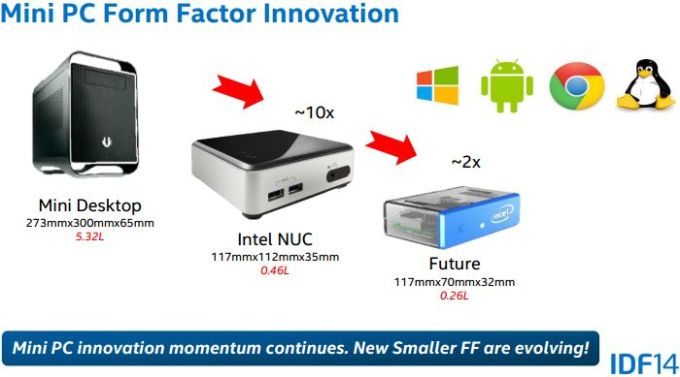 In a session at this week’s Intel Developer Conference in San Francisco, Intel outlined some of the things PC makers need to consider when building tiny desktops.

First there’s less space for traditional components such as hard drives or even full-sized ports, so little PCs are more likely to use flash storage and embedded memory. 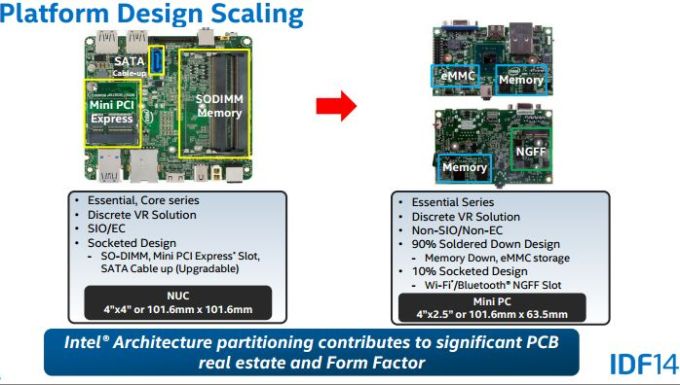 This can make it harder to upgrade a mini PC than an old-school desktop… but leaving out some legacy ports and other features can also help drive down the price of these little computers making it easier to replace them every few years rather than upgrading.

Intel figures the bill of materials for a typical mini PC today comes in at around $100, while future models could cost just over $50 to make (although they’ll probably sell for closer to $100). 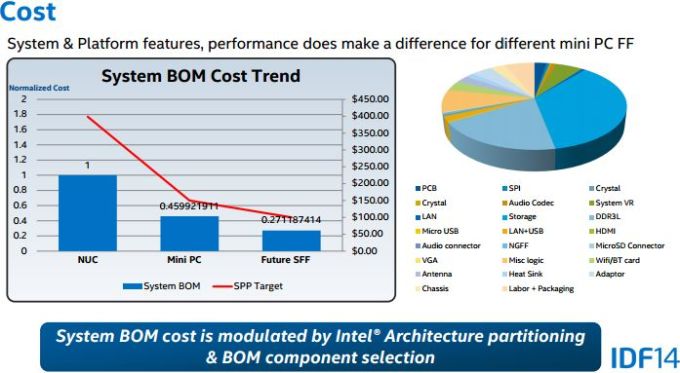 While I’m a fan of allowing upgrades as a way to make a system last longer and reduce the long-term carbon footprint, there’s less material and fewer components in these little machines… which means there’s less e-waste to recycle or trash when it does come time to upgrade.

Ultimately Intel figures we’ll see tiny desktops as small as 4.6″ x 2.8″ x 1.26″ which are fully capable Windows, Android, Chrome, and Linux computers in the not too distant future. Those systems would be about half the size of a current Intel NUC device… and if Intel’s right, they could cost half as much to build. Hopefully that’ll also lead to a street price that’s about 50 percent lower.