Intel is showing off a number of concept devices, prototypes, and reference designs at Computex this week, including the Tiger Rapids dual-screen concept that’s paving the way for devices like the upcoming Lenovo Yoga Book 2 and Asus Project Precog.

But Notebook Italia also got details about a 2-year-old prototype that Intel calls a “Pocket PC,” a name which should ring a bell for folks who have been following the handheld computing space since before smartphones were a thing.

Intel’s prototype is basically a phone-sized Windows tablet with a Kaby Lake-Y processor and support for running full-fledged desktop apps when connected to a desktop docking station. 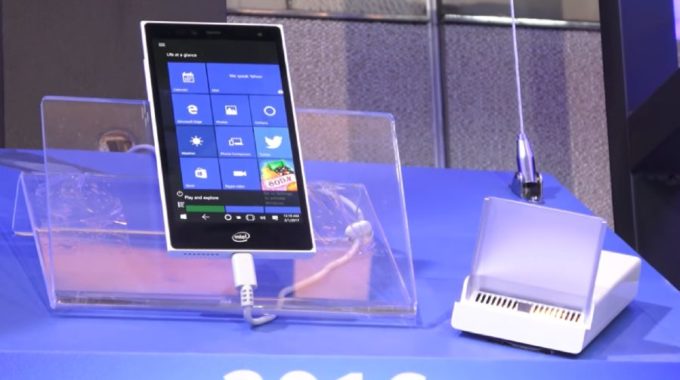 Unlike the Microsoft Lumia 950, HP Elite x3, and a handful of other smartphones that offer a desktop-like experience thanks to Microsoft’s Continuum for Phone software, the Intel Pocket PC would have been capable of running the full desktop version of Windows rather than a stripped-down version. That’s thanks to the x86 processor and support for Windows 10 instead of an ARM chip and support for Windows 10 Mobile.

Of course, now that there’s a new version of Windows 10 that can run on ARM and which supports many x86 apps thanks to emulation, you might not need an Intel processor to build a phone that blurs the lines between a mobile device and a desktop computer.

So it’s anybody’s guess whether Microsoft’s Surface Phone, if it actually exists, will feature an ARM chip or an Intel processor.

The fact that Intel’s Pocket PC prototype is 2 years old and we haven’t seen any devices based on the design yet may be an indication that device makers aren’t enamored with the concept. Or maybe they’re just waiting for Intel’s next-gen Core Y-series chips, which should be available later this year.