Intel’s Atom processors are low-power chips aimed at smartphones, tablets, and entry-level notebook and desktop computers. The Atom line has been around for over half a decade, but this year Intel is shaking things up by splitting the line into three segments.

The Intel Atom x3 line of chips are aimed at entry-level devices which could sell for as little as $75 or even less. These chips will be based on Intel’s SoFIA platform and include low-power processors and integrated modems.

More powerful chips based on the new Cherry Trail architecture will be branded with the Intel Atom x5 or Atom x7 names for mid-range and higher-performance systems. 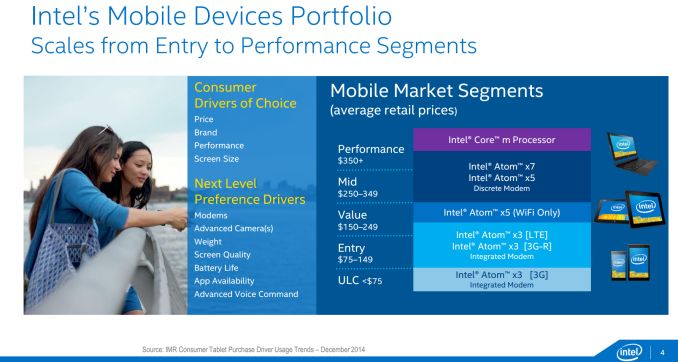 Intel reports that an x7 chip scores up to twice as high in the GFXBench graphics test as an Intel Atom Z3795 Bay Trail processor, and up to 50 percent better in the 3DMark Ice Storm Unlimited test.

The top-of-the-line Atom x7 Cherry Trail chip is the Intel Atom Z8700 series which Intel is positioning a low-power, moderate performance chip for devices priced up to $500. This chip is the most powerful Atom processor Intel will offer, but it’s still a step below the company’s Core M Broadwell processor which is also a low-power chip, but which offers higher performance.

Other Cherry processors include the x5 chips such as the Atom Z8300 and Z8500 Series. Intel is positioning these as processors for $150 devices in the $150 to $350 price range, which means that these are the chips you’ll most likely find in low-cost Windows and Android tablets later this year. 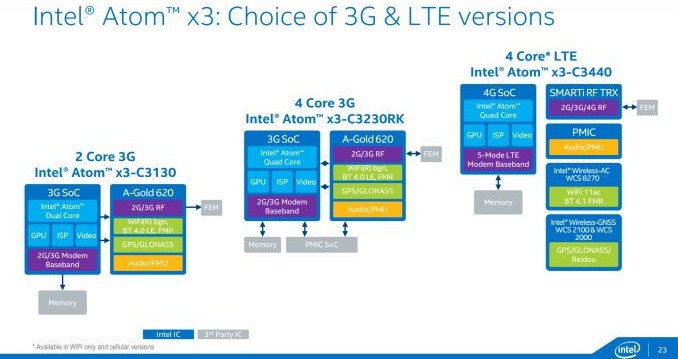 These are all 28nm 64-bit chips aimed at low-cost smartphones and connected tablets. Note that they feature ARM’s Mali graphics technology instead of Intel HD graphics, and the mid-range model is the processor that Intel developed in partnership with Chinese chip maker Rockchip.

via UMPC Portal and AnandTech