Intel’s next-generation chips for notebooks, tablets, and ultrabooks will use even less power than the Ivy Bridge ultra low voltage chips introduced this year. In mid-2013, the first 4-th generation Core processors (code-named Haswell) should hit the market, and they’ll use just 10 to 15 watts of power, or as much as 50 percent less energy than today’s lowest power Ivy Bridge processors. 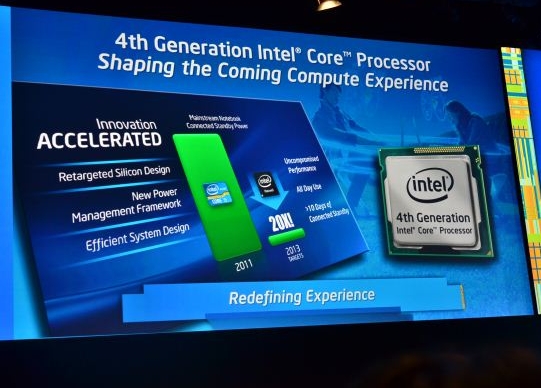 That could lead to ultrabooks and tablets that get significantly better battery life than models running today’s Core i3 and Core i5 chips.

The BBC reports Haswell chips also offer improved graphics performance as well as better support for speech and facial recognition, among other things.

According to Anandtech’s liveblog from an Intel event in San Francisco, Haswell chips will use 20 times less power when idle than last year’s Sandy Bridge chips. No, I don’t know why Intel isn’t comparing Haswell to this year’s Ivy Bridge processors.

Meanwhile, Intel expects Haswell chips to offer twice as much performance as an Ivy Bridge chip.

Unlike 3rd generation Core (Ivy Bridge) processors, which launched first for high-end notebooks and desktops, Intel will be taking a mobile-first approach when it launches Haswell in 2013. So we’ll see tablet and notebook chips before more powerful desktop versions.

Laptop Magazine shot some video of the Haswell demonstration.

Chippy from Ultrabook News also took some notes at the press event. You can check them out for more details about the technology behind the Haswell platform.