Intel’s Project Athena is an initiative to help ensure that upcoming mobile computers offer the kind of experience that (Intel thinks) customers demand from a thin and light notebook or 2-in-1 computer.

First announced at CES in January, this week’s Computex show is a bit of a coming out party for Project Athena. Intel is explaining a bit more about how the initiative works and what will qualify a PC as a Project Athena device.

Unlike the Ultrabook initiative, which helped drive the development of thin and light computers by setting a series of tech specs for PC makers to hit, Athena is all about experiences — like all day battery life, instant-resume, and always-connected capabilities. And the goalpost is movable — Intel says Athena will be a multi-year effort, with criteria updated regularly. 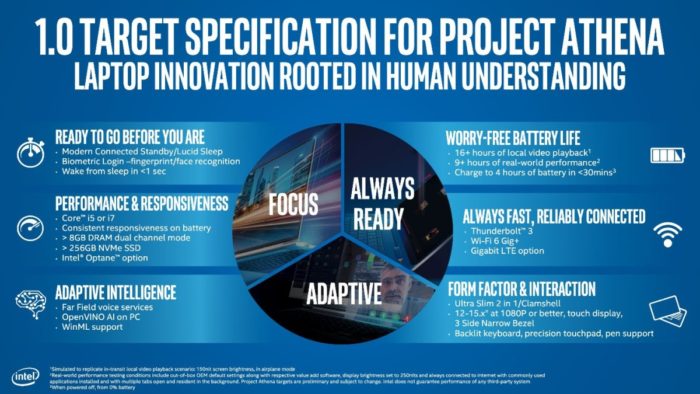 According to Intel, PC makers including Acer, Asus, Dell, Google, HP, Samsung, and Sharp are already working on devices that meet the Project Athena requirements… but honestly, it’s likely that some existing hardware released in the past year or two already meet the requirements.

That’s because Intel is focusing on Key Experience Indicators or KEIs rather than hard and fast specs… although there are some minimum requirements for a Project Athena device.

For example, Intel says a Project Athena v1 device will need to have an Intel Core i5 or Core i7 chip, at least 8GB of RAM, and at least 256GB of PCIe NVMe storage.

In terms of design, Intel wants to see “ultra slim” laptops or 2-in-1 devices with 12 inch to 15 inch displays, slim bezels, and 1080p or higher resolution screens. Touchscreens, backlit keyboards, and precision touchpads are also required.

Other features Intel is highlighting include support for far field voice detection for interacting with voice assistants, support for biometric security (through fingerprint readers and/or face recognition), and support for fast connections thanks to Thunderbolt 3 and WiFi 6.

How a PC maker delivers those things can vary… although I suspect Intel’s going to be pushing its upcoming Ice Lake chips pretty hard.

Intel is also going to be pushing adoption of optional features such as 5G or 4G LTE connectivity and Intel Optane memory.

Overall Project Athena represents Intel’s latest effort to drive the mobile PC space forward. But as The Verge points out, Intel currently has no plans to slap an Athena badge on machines that meet its requirements. So it’s unclear whether users will actually know that a PC has been tested by Intel and shown to meet the requirements… or whether PC makers will really hop on the platform.

For now, Intel does say that we can expect to see Project Athena mobile computers later this year, including the new Dell XPS 13 2-in-1, HP Envy 13 Wood series, as well as the Lenovo Yoga S940 and Acer Swift 5.