Microsof’ts Windows 8 operating system is designed to run on a wide range of devices including notebooks, desktop computers, and tablets. But it’s the tablets that are getting the most attention due to the new touch-friendly Metro user interface and support for low power ARM-based processors.

But Intel thinks there’s a role for its x86 chips in Windows 8 tablets as well, and CNET reports the company is outlining its guidelines for Windows 8 tablets featuring its upcoming Atom Z2670 low power processors. 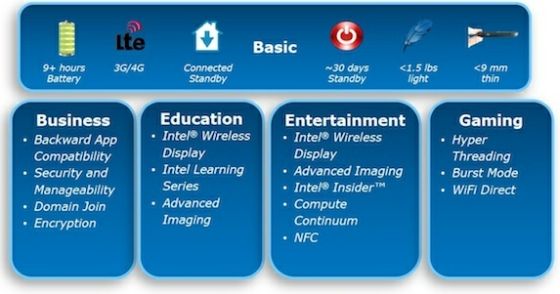 The Intel Atom Z2670 Clover Trail processor is a dual core processor with low power consumption and support for a “burst mode” which will allow the clock speed to ramp up when needed.

Intel says tablets with the new processor may be able to get more than 9 hours of battery life, which would be comparable to what we’ve come to expect from the Apple iPad and Android tablets with ARM-based processors.

What will set tablets with Intel chips apart from those with ARM chips is support for legacy Windows apps. Any program written to run on Windows 7 or earlier will not run on a tablet with an ARM-based processor unless the app has been retooled to support the chip architecture. Tablets with x86 processors, on the other hand, will be able to run all Windows apps.

But if my experience with the Kupa X11 is anything to go by, just because a tablet can technically run older Windows apps doesn’t mean it can run them well. The X11 is a 10 inch Windows tablet with an Intel Atom Oak Trail processor, and while it can run a wide range of apps, many of them are painfully sluggish. I don’t expect a huge difference with Intel’s upcoming Clover Trail platform, since the chip maker is more focused on reducing power consumption than on improving performance in that chip.

The company expects tablets to weigh less than 1.5 pounds, measure less than 0.4 inches thick, and feature 3G or 4G capabilities.

Windows 8 is expected to launch in the second half of 2012, and Intel plans to have its Clover Trail chips ready to go at the same time.

One reply on “Intel outlines guidelines for low powerWindows 8 tablets”