Intel has released new builds of Android 4.4.2 KitKat which have been optimized to run on devices with 64-bit Intel processors.

Initially that means you can download and install this version of Android on two devices: an Intel NUC mini-computer or a Dell XPS 12 ultrabook with a Celeron N2820 CPU or 4th-gen Intel Core “Haswell” processor, respectively. Support for the MinnowBoard Max dev board is coming in June.

But Intel says with a bit of work, this flavor of Android should support any device with a recent Intel 64-bit processor. 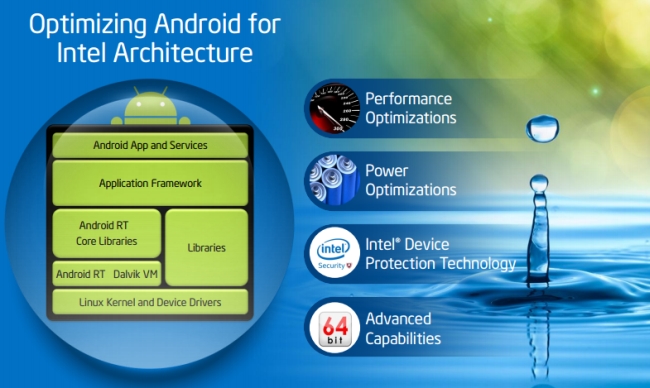 While this build of Android is primarily aimed at developers, it lays the groundwork for 64-bit versions of Android that can run on a range of tablets, notebooks, desktops, and other devices.

Android has been able to run on devices with Intel chips for a while. But Intel says it’s put in some extra work to optimize the code to better support HTML 5, JavaScript, WebKit, V8, and Dalvik, among other things. The Linux kernel has also been tuned to offer better power, memory, and performance improvements.

That said, there are still some bugs in this build. Suspend and Resume functions are a bit iffy, and taking a picture sometimes results in a green image rather than a photograph. Bluetooth also isn’t supported, but that’s not a bug… it’s a licensing issue.

Intel says this build of Android is “64-bit ready.” Google hasn’t released an official build of Android for 64-bit chips yet, so while Intel’s software features a 64-bit Linux kernel, we’ll have to wait for an update from Google until the whole operating system can take full advantage of processors like those found in the Intel NUC, Dell XPS 12, and eventually other devices with 64-bit Haswell or Bay Trail chips.

2 replies on “Intel optimizes Android 4.4 KitKat for its 64-bit chips”