Intel’s NUC line of mini desktop computers have been around for years, and for the most part they stuff the low-power guts of a laptop into a little computer that’s not much bigger than a small stack of CDs.

But a few years ago the company kicked things up a notch with the introduction of a gaming NUC called “Skull Canyon.” It was a bit larger than most NUC models, but thanks to a Core i7-6770HQ quad-core processor and Intel Iris Pro 580 graphics, it also packed a lot more punch.

Now Intel is updating the design with a new “Hades Canyon” model that features an 8th-gen Intel Core chip with AMD Radeon Vega graphics. The result is a tiny desktop that you can use for modern gaming or virtual reality experiences. 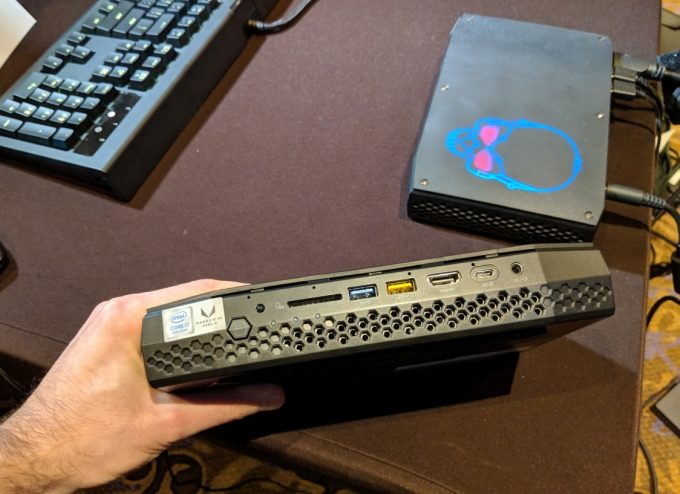 The new NUC will come in two models:

Keep in mind that both of those prices are for barebones kits, which means you’ll need to supply your own memory, storage, and operating system, so you’ll want to factor those into the total cost.

They support up to 32GB of RAM and feature 2 slots for solid state storage.

Both models measure 8.7″ x 5.6″ x 1.5″ so it’s a little larger than the previous model. But it’s that extra space helps dissipate the additional heat associated with the new processors and it also makes room for even more ports, including:

Intel officials say the company is targeting multiple markets though. The system offers up to 3 times the gaming performance of a Skull Canyon NUC, which makes it more of a true gaming machine. It may not be as powerful as a high-end tower with liquid cooling and a top-of-the-line CPU and graphics. And the fact that you can’t upgrade the CPU may remove some of the appeal.

But some gamers might want a system they can slide into a backpack and carry with them, whether it’s their primary gaming rig or a secondary machine.

As for the commercial space, this little computer can power up to 6 displays at once, so while other NUCs can drive a digital signage system, this model could power a whole display wall.

Intel will also be updating other members of its NUC lineup this year, with new Gemini Lake and Coffee Lake-powered models. Next-gen Intel Compute Card hardware is also on the way, and Intel is working with hardware partners to deliver displays, IoT gateways, and other hardware that uses the company’s modular compute cards.

Unfortunately the Compute Stick form factor is stagnant. Intel continues to offer models with Intel Atom Cherry Trail and 6th-gen Intel Core M Skylake processors, but there are no plans to offer models with more recent Intel chips, due to relatively week demand for the form factor. I guess we’ll have to rely on third-party PC makers for next-gen PC sticks.

Update: Have a look under the hood, where you can see slots for memory, storage, and a wireless card, among other things.

Oh, and if you’re wondering what that big box is next to the NUC, it’s the power brick… which is almost as big as the computer itself. It is a 230 watt power supply, after all.