For the past 50 years, Intel co-founder Gordon Moore’s observation that the density of transistors on integrated circuits doubled at regular intervals has proven… somewhat true. This has become known as Moore’s Law, and the idea is that transistor density doubles every 24 months, thus offering improved performance and efficiency.

But things could slow down one day as the costs of manufacturing ever-more-densely-packed chips increases.  Intel representatives seem to think the chip maker can keep up with Moore’s law for at least a few more years though. 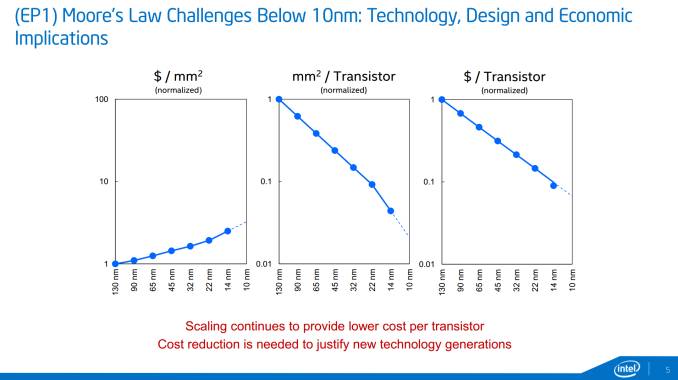 The thing to keep in mind is that Moore’s Law isn’t really a law… it was originally an observation about the current state of the industry… decades ago. Since then, the industry has sort of turned it into a self-fulfilling prophecy, investing resources into keeping up with the expected rate of advancement.

There’s only so far that you can go without dramatically increasing the costs of chip production though, and according to reports by PC World and AnandTech, Intel thinks that it can probably crank out 10nm chips in 2016 and 7nm processors in 2018 without hitting a wall.

In the past, Intel’s Mark Bohr has said the company expects to be able to keep up with Moore’s Law through the early 2020s, when 5nm chips are expected to hit the streets. But it’s not entirely clear at this point whether chip makers will be able to find cost-effective technologies to produce 5nm or smaller chips, which means that either Moore’s Law could get a speeding ticket in the next decade, or new technologies will have to be found in order to improve speed and efficiency of future chips.

8 replies on “Intel: Moore’s Law isn’t dead yet… 7nm chips are in the works”